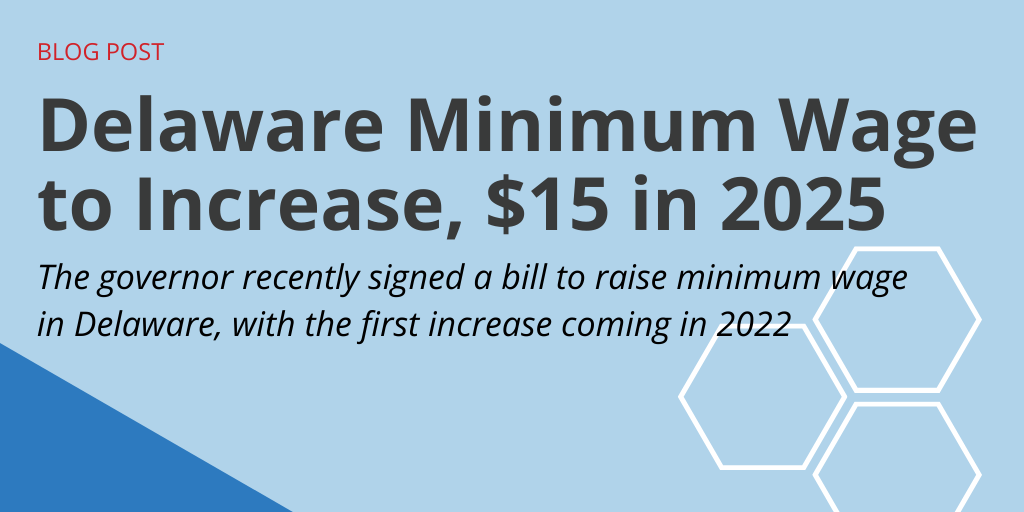 Delaware has set a somewhat aggressive schedule for minimum wage increases, going up more than a dollar an hour each year starting in 2022.

A Delaware minimum wage increase was signed into law last month, making it yet another state moving toward a $15 rate.

While the state’s current minimum wage rate is above the federal level, the legislation calls for further increases over the next few years until eventually reaching the $15 threshold in 2025.

“Delawareans who go to work full time shouldn’t be living in poverty,” Gov. John Carney said in a statement. “I am proud to sign Senate Bill 15 today, gradually increasing the minimum wage to $15. Thank you to Senator Walsh and Representative Brady for their leadership, other members of the General Assembly, Union advocates, and everyone else striving to make Delaware the best place to live, work and raise a family.”

The newly signed law will bring gradual rate increases to the standard minimum wage rate over the coming years. Increases are set for Jan. 1 each year.

The Northeast has seen a number of minimum wage rate increases in recent years. Only Pennsylvania — where the governor has pushed for a minimum wage increase — and New Hampshire still use the federal rate of $7.25.

“For the American economy to work for everyone, one thing must be true: that if you work hard day-in and day-out, you’ll be able to earn enough to live with dignity,” state Sen. Jack Walsh, the primary sponsor of Senate Bill 15, said upon the signing of the bill. “Today, Delaware’s workers are a monumental step closer to that reality. Our grocery store clerks, supply chain workers, janitors and long-term care workers showed up to keep our economy open during the pandemic. With Senate Bill 15, we are showing how much we value them with more than platitudes, but with the kind of living wage they’ve earned with their hard work.”

As is generally the case with new minimum wage laws, employers should keep an eye out for an updated labor law posting.

Lastly, for employers of tipped workers, the law does not provide for an increase. The tipped wage will remain at $2.23. Employers should also note Delaware’s separate training and youth rates, as well as other exemptions.

The Fight for $15 movement — along with a worker shortage and the COVID-19 pandemic putting a spotlight on low-wage workers — has renewed discussions about minimum wage across the country.

Many large employers have unilaterally raised rates to attract workers, voters are being asked to weigh in via ballot initiatives, and lawmakers continue to introduce bills that would raise minimum wage.

Meanwhile, an early push for a new federal minimum wage under the Biden administration has lost steam, though an executive order will bring a minimum wage increase for federal contractors.

Still, the tide of smaller jurisdictions creating their own minimum wage rates continues, especially in progressive states like California, where several cities have rates at more than double the federal level.

Also, the state has set a somewhat aggressive schedule for the bumps, with increases of more than a dollar an hour each year starting in 2022, making budget projections, menu pricing, staffing considerations and other potential impacts of the new rate even more important for employers.

With another state moving toward a $15 minimum wage, it will be interesting to see how Delaware’s new rate impacts regional holdouts, as well as the overall push