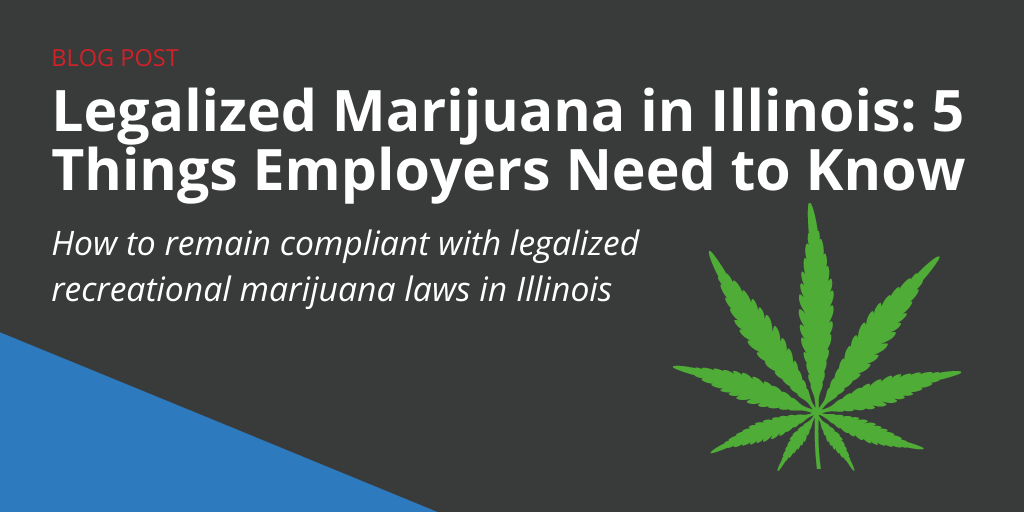 What do employers need to know about legalized marijuana in Illinois?

What do employers need to know about legalized marijuana in Illinois?

Recreational use of marijuana in Illinois became legal Jan. 1, 2020, for adults 21 or older. The state in December 2019 clarified the law, which gave employers a better sense of how to address the specifics of dealing with marijuana use among employees and potential hires. (Medical marijuana has been legal in the state since 2015.)

Marijuana, of course, remains illegal under federal law. But the expansion of legal weed across the country continues to be a sticking point for employers, especially with New York and Virginia joining the group of states with legalized recreational marijuana earlier this year.

Legalized Marijuana in Illinois: What Employers Need to Know

Illinois law says employers cannot discriminate against an employee for marijuana use outside the workplace. The state added weed to protected substances such as alcohol and nicotine.

However, the Cannabis Regulation and Tax Act also gives employers plenty of leeway when it comes to drug-free workplace policies. Which brings us to our next point.

Despite its legalization, employers are free to ban the use and possession of marijuana in the workplace. Employers can also bar workers from using it while on-call.

The tricky part of the law for employers in Illinois employers is identifying workplace impairment.  But the law provides some guidance when it comes to identifying symptoms of marijuana usage. Generally, the legislation outlines signs impairment as:

However, as more employees working from home since the onset if COVID-19 pandemic, employers may want to focus on regulating usage by time, not place.

Despite those tips for employers in the law, impairment remains tough to prove.

Unlike a breathalyzer, there is no test that shows how high a person is (only whether they have used marijuana), creating difficulty for employers to prove impairment. Also, the rise of edible forms of marijuana means employers may not be able to simply tell by smell whether a worker has been using it.

Meanwhile, the law also says: “If an employer elects to discipline an employee on the basis that the employee is under the influence or impaired by cannabis, the employer must afford the employee a reasonable opportunity to contest the basis of the determination.”

In Illinois, companies can still conduct “reasonable drug and alcohol testing” of both current and prospective employees.

Though state law allows companies to reject applicants and discipline employees based on a positive test, companies could face legal challenges.

“The tension is if an employer decides to withdraw an offer of employment or terminate someone based solely on a positive marijuana test, without any additional signs of impairment, I think that leaves room for a question about whether they’re taking action based on someone’s lawful use of marijuana while they’re (off) duty,” Julie Stahr, a partner in labor and employment law at Schiff Hardin in Chicago, told an Illinois newspaper.

However a company implements a policy regarding drug use, maintaining compliance means those policies must be applied evenly.

“If you’re subjecting somebody to a drug test on the basis that, ‘I kind of think that guy is using drugs,’ that’s a terrible idea,” Benjamin Wesselschmidt, an employment attorney, told St. Louis Public Radio, adding that such action could result in a lawsuit.

He also noted the racial undertone of marijuana’s history and the war on drugs in general, warning employers of bias playing a role in drug testing of employees and prospects.

Marijuana Legalization and Hiring in the U.S.

The expansion of legalized marijuana in the U.S. has led to a renewed discussion of how businesses address usage, especially as it relates to hiring.

In Nevada, the state passed a law making it illegal to refuse to hire someone based on the presence of marijuana in pre-employment drug screenings. (There are some exceptions for emergency personnel, drivers, etc.)

Generally, it’s up to the company to examine its operations before settling on a drug-testing policy. “In states where it’s legal, they’ll tell you, ‘We can’t get good candidates if we test for marijuana,’” Melissa Osipoff, an attorney with the law firm Fisher Phillips, told the New York Times.

“First, the jobs within our organization do not require a pre-employment drug test, and second we trust that our team members will make the appropriate decisions in order to be a productive member of our teams while adhering to local laws,” he said.

The tide of states legalizing recreational marijuana doesn’t seem to be slowing. Plus, public support for legalized marijuana has been growing, according to the Pew Research Center.

Ultimately, companies must be aware of new laws, and guidance from state departments, regarding marijuana in the workplace, appropriate hiring practices and employee rights.

This blog was originally published in January 2020 and has been updated.