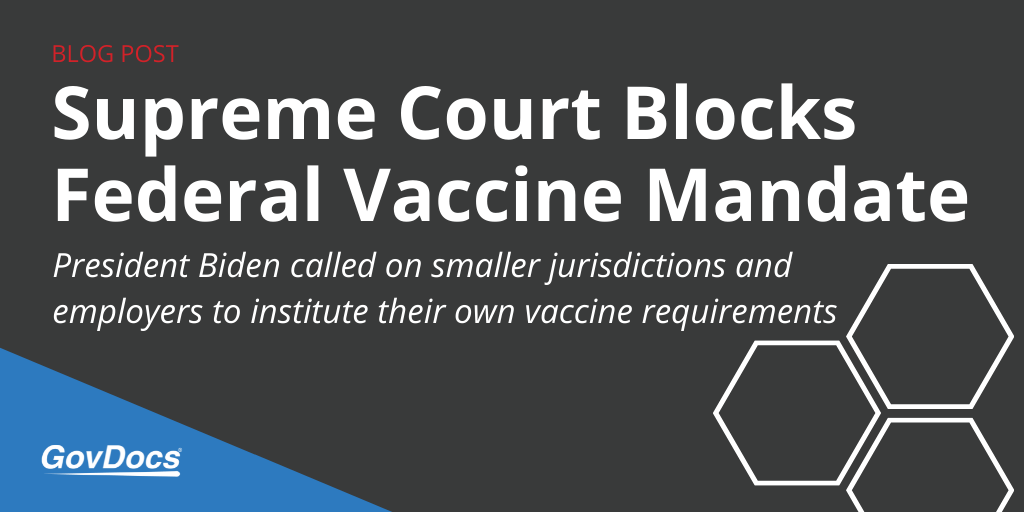 The U.S. Supreme Court on Thursday ruled against the Biden administration’s vaccine mandate for employers with 100 or more employees.

The court ruled 6-3 against the mandate.

It was the latest in a string of defeats for the vaccine mandate, which would have forced large employers to ensure employees are vaccinated or have workers submit negative tests weekly to enter the workplace. (Unvaccinated employees would also have had to wear a mask at work.)

“Although Congress has indisputably given OSHA (the Occupational Safety and Health Administration) the power to regulate occupational dangers, it has not given that agency the power to regulate public health more broadly,” the court wrote in an unsigned opinion. “Requiring the vaccination of 84 million Americans, selected simply because they work for employers with more than 100 employees, certainly falls in the latter category.”

Lower courts had previously stayed the OSHA emergency temporary standard (ETS) regarding the vaccine mandate, and OSHA in November 2021 said it would suspend activities related to its implementation.

It is also important to note that the Supreme Court’s decision directed the Sixth Circuit Court to reconsider the ETS, and it could come before the high court again in the future.

Meanwhile, President Biden called on smaller jurisdictions, as well as employers, to institute their own requirements, saying he would pressure businesses to institute vaccine and testing policies.

“I am disappointed that the Supreme Court has chosen to block common-sense life-saving requirements for employees at large businesses that were grounded squarely in both science and the law. This emergency standard allowed employers to require vaccinations or to permit workers to refuse to be vaccinated, so long as they were tested once a week and wore a mask at work: a very modest burden,” Biden said in a statement. “As a result of the Court’s decision, it is now up to States and individual employers to determine whether to make their workplaces as safe as possible for employees, and whether their businesses will be safe for consumers during this pandemic by requiring employees to take the simple and effective step of getting vaccinated.”

On the other end of the spectrum, the National Retail Federation (NRF) lauded the Supreme Court’s decision.

“While NRF has maintained a strong and consistent position related to the importance of vaccines in helping to overcome this pandemic, the Supreme Court’s decision to stay OSHA’s onerous and unprecedented ETS is a significant victory for employers,” David French, senior VP of government relations, said in a statement. “As NRF and other plaintiffs articulated in our briefs before the court, OSHA clearly exceeded its authority promulgating its original mandate under emergency powers without giving stakeholders the benefit of a rulemaking process.”

Despite the Supreme Court’s ruling this week, employers that operate across the nation still have other vaccine mandates, and COVID-19-related matters, to monitor.

That includes states with laws banning vaccine mandates, such as Florida, Texas and others. However, in many jurisdictions the vaccine mandates apply to government workers or medical personnel.

But it’s more than vaccine mandates for employers keep an eye on to remain complaint. The advance of the omicron variant has sparked additional requirements, such as ensuring employees and patrons wear masks or having customers show proof of vaccination before entering bars and restaurants.

Employers with locations across the U.S. should check local orders and guidelines to ensure compliance.

While the OSHA ETS is on hold for now, employers should still review its specifics in case there is a reversal in the future.

Plus, the continued concern over COVID-19 has prompted lawmakers to reinstitute some of the measures taken during previous phases of the pandemic, making employment law compliance all the more difficult.

Employers should review local statutes, keep an eye on any activity regarding the federal mandate, and consult counsel.