COVID Vaccine Mandate: What Does it Mean for Employers? 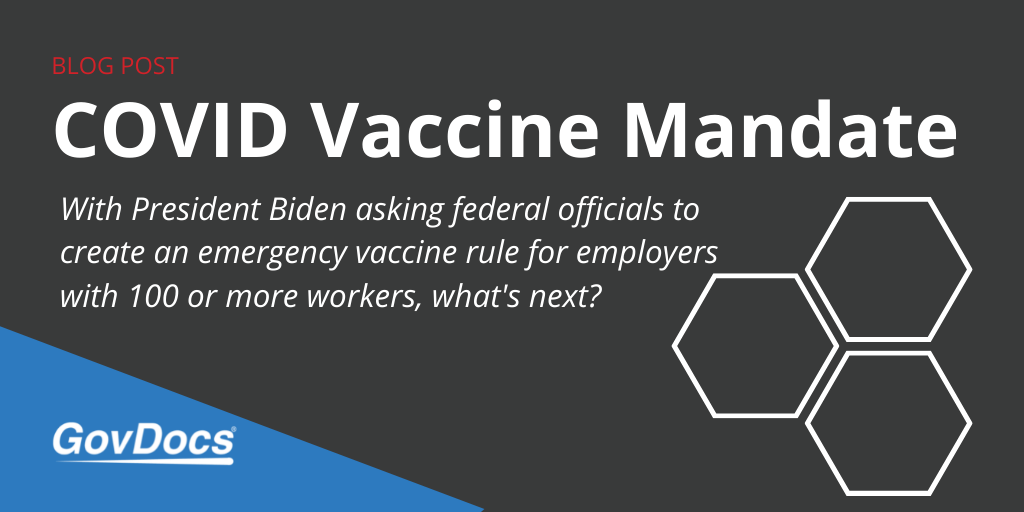 Republican governors have railed against the COVID vaccine mandate, with some speculating the mandate won’t hold up in court.

What’s the plan for the COVID vaccine mandate?

For months, large employers have been grappling with the implications of implementing a vaccine mandate for employees. But they may soon not have a choice.

President Biden on Sept. 9, 2021, said he would direct the U.S. Department of Labor (DOL) to issue an emergency rule that would require employers with more than 100 workers to mandate the COVID-19 vaccine. Employees who don’t get the vaccine would have to undergo weekly testing in order to come to work.

The measure, if it goes through, is expected to impact 100 million people, about two-thirds of the American workforce.

As of this writing, the DOL’s Occupational Safety and Health Administration (OSHA) has yet to issue a rule regarding the vaccine mandate.

OSHA is expected to issue the mandate within the next couple of weeks.

Meanwhile, OSHA is also tasked with developing a rule that would require large employers to provide workers with paid leave in order to get vaccinated or recover from the effects of the shot. (It would be part of the overall rule regarding the vaccine mandate.)

But despite Biden’s announcement on a vaccine mandate, it will likely face legal challenges. Republican governors have argued against the initiative, with some speculating the mandate won’t hold up in court. And the Republican National Committee said it plans to sue the Biden administration over the order.

Joe Biden told Americans when he was elected that he would not impose vaccine mandates. He lied.

When his decree goes into effect, the RNC will sue the administration to protect Americans and their liberties. pic.twitter.com/XinwFw4bam

How the emergency rule is handed down and potential litigation will be sorted out in the coming weeks, but employers may want to prepare for the mandate sooner than later. Employers that do not adhere to the emergency rule could face fines of $14,000 per violation.

Large Employers and the Vaccine Mandate

Today, about half of major U.S. businesses do not require employees to get the vaccine. A little over half of the U.S. population is vaccinated.

Of course, the higher percentage an employer’s workforce is vaccinated, the easier it would be to comply with the mandate. Since the vaccine became available, most employers have at least encouraged workers to get shots.

And getting ahead of the mandate would be beneficial for:

Outside a successful lawsuit to stop the mandate, an emergency temporary standard can remain in place for six months before it must be subbed out for a permanent OSHA standard.

Still, employers will likely have to wait until OSHA rolls out the emergency rule before knowing the specifics:

The aggressive vaccine push from the Biden administration may have caught many employers off guard.

Though most companies have been weighing the pros and cons of vaccination, this latest development will no doubt require many employers to re-evaluate their current practices, consider what can be done in the weeks before the mandate comes down, and decide whether to act beforehand.

While legal action against the mandate could cause delays, employers may want to consult counsel and prepare for its implementation.