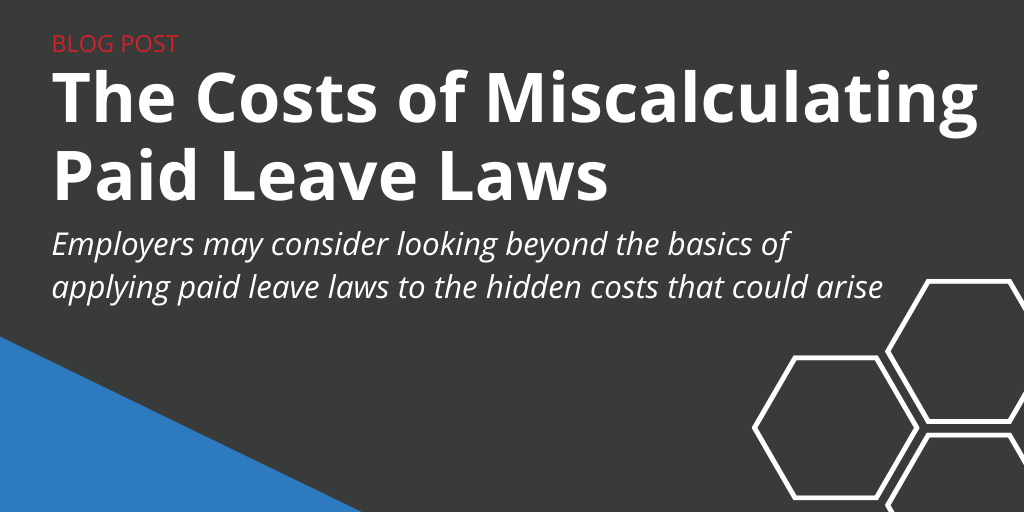 Creating new processes to remain compliant with this ever-changing landscape will be paramount for large employers whose at-home workforce will likely alter their employment law compliance efforts.

What are the costs of miscalculating paid leave laws?

The proliferation of paid leave laws in recent years has created a complex web for employers to unravel. But in addition to the challenges of complying with the laws themselves, there are other costs beyond the time of deciphering the laws and paying out leave benefits to employees.

Employers, especially those with locations spread across the country, may consider looking beyond the basics of applying paid leave laws to the hidden costs that could arise.

Here, we will examine some of the potential issues associated with miscalculating paid leave laws.

Penalties for violations of paid leave laws vary widely. Massachusetts, for example, allows for fines of up to $15,000 under its earned sick time law. Elsewhere, fines are generally lower, but employers who violate these laws can also be exposed to payment of leave time, attorney’s fees and more.

The eyes of lawmakers and government enforcement agencies have been especially focused on compliance since the onset of the COVID-19 pandemic. Employees, meanwhile, have been more cognizant of their rights, with many workers contacting legal services about leave laws over the past several months.

As was the case with minimum wage laws, governmental bodies could turn from education to enforcement in the coming years.

Sometimes, for the sake of simplicity, businesses will adopt a single paid leave policy for all employees, regardless of where they work and live. Even taking a regional approach to paid leave likely means employers are providing more benefits than they would otherwise. While this approach may save time and energy at headquarters, it can add up quickly.

Though this is not necessarily a miscalculation, the cost of being too generous with paid leave could be a pitfall for multilocation employers.

Can employees use paid leave to care for their sister’s sick service dog? In one jurisdiction they can.

Employers must know the differences between paid leave laws. Not every request for paid leave is valid under a jurisdiction’s regulations. The vagaries of these laws is what makes managing paid leave such a challenge.

Employers must know whether a jurisdiction:

These are but a few of the issues employers must address when applying paid leave laws, in addition to accrual rates, calculating payouts for paid family and medical leave, and more.

Lastly, we have the potential for bad press.

As stated above, stories about noncompliance with paid leave don’t come across your news feed as often wage theft, for example. But the COVID-19 pandemic has put a spotlight on the need for paid leave and the seriousness of compliance in general.

A company’s public image has grown in importance in recent years, and complying with employment laws is a major component of how people view a business.

Miscalculating means a lot of things, especially when it comes to the intricacies of paid leave laws.

The hidden costs of misapplying paid leave laws can impact the bottom line, employee morale and create a cascade of other issues.