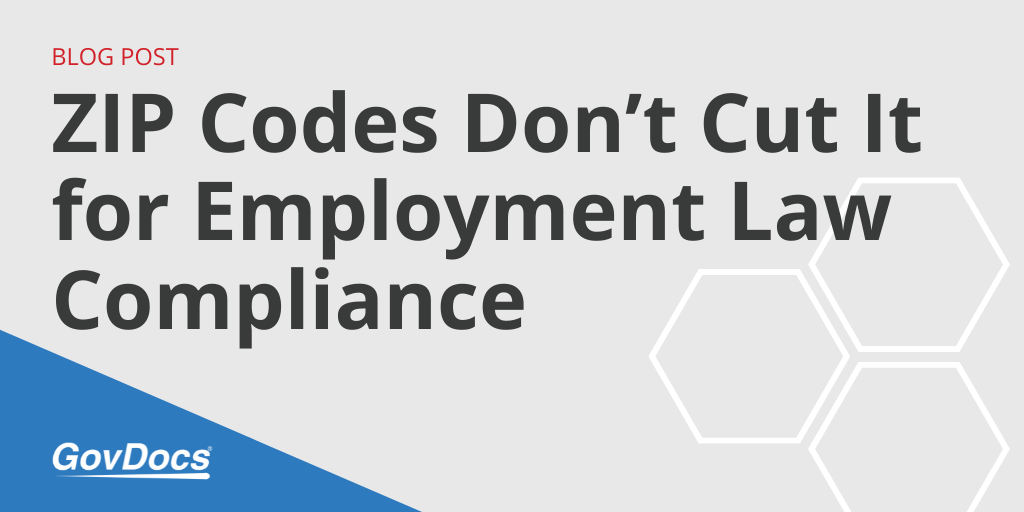 Large, multi-jurisdiction employers have plenty of employment law issues to manage without worrying about applying the wrong jurisdiction’s laws.

In the face of a major increase in new employment laws in recent years, employers have seen a new challenge: making sure they know the correct jurisdiction for their locations.

At first glance, it might seem easy enough to determine which jurisdiction applies to which location. But it’s not always simple.

Mostly at the city and county level, employers find that ZIP codes alone are not sufficient to determine the correct employment laws to apply to their locations. Whether it’s minimum wage, paid leave or labor law postings, the challenges of applying laws can be cumbersome, especially with about 22,000 cities and counties currently issuing posting requirements.

Below, we’ll examine a few reasons why ZIP codes are not the best way to determine which employment laws apply, as well as some real-world examples.

ZIP codes were initially made to make mail delivery easier. They weren’t made to correspond to boundaries such as cities, counties, or even states. They can, and do, cross state, county and city borders.

Cities and counties are defined, created and managed by state and local government bodies, not the U.S. Postal Service. Also note that cities and names are often changed to a preferred ZIP Code distribution center city to optimize sorting and delivery, and don’t always reflect the correct jurisdiction.

Plus, there are a smattering of places in the U.S. without a ZIP code at all.

Take, for example, Black Hawk County in Iowa, whose county seat is the city of Waterloo. The Waterloo “postal area,” based on a so-called ZIP Code Tabulation Area, includes a large swath of acreage outside the city, as well as a small portion of neighboring Hudson, Iowa.

At a larger level, ZIP codes can even span state borders:

Meanwhile, as another example, Oregon breaks out its minimum wage law based on population density:

But these borders can shift with new development, population changes and other factors. And none of them have to do with ZIP codes.

As one might expect, the posting, minimum wage and other employment laws are different across jurisdictions, and maintaining compliance based on ZIP codes isn’t the best strategy.

Even using city addresses can cause issues.

There is a mall in California with a Santa Clara address. But a portion of the structure falls within the bordering city of San Jose, which has a paid sick leave law while Santa Clara does not. This, too, could lead to noncompliance.

No ZIP Codes, What’s the Answer?

Large, multi-jurisdiction employers have plenty of employment law issues to manage without worrying about applying the wrong jurisdiction’s laws.

One way to combat this is through a closer examination of locations. Employers should take a magnifying glass to the jurisdictions where they have locations to ensure accuracy.

But even more precise is the use of geospatial technology, as GovDocs does.

However employers approach ensuring they have the correct employment laws applied to their locations, it’s always a good idea to audit those jurisdictions’ laws.

Employers with hundreds, or even thousands, of locations across the U.S. have plenty of employment law matters to address.

But without the proper jurisdictions tied to locations, it opens the door for noncompliance and all the issues that can come with it:

For employers that operate in many jurisdictions across the nation, ensuring location accuracy is the first step toward a successful compliance program.

What Is Wage Theft?
Scroll to top