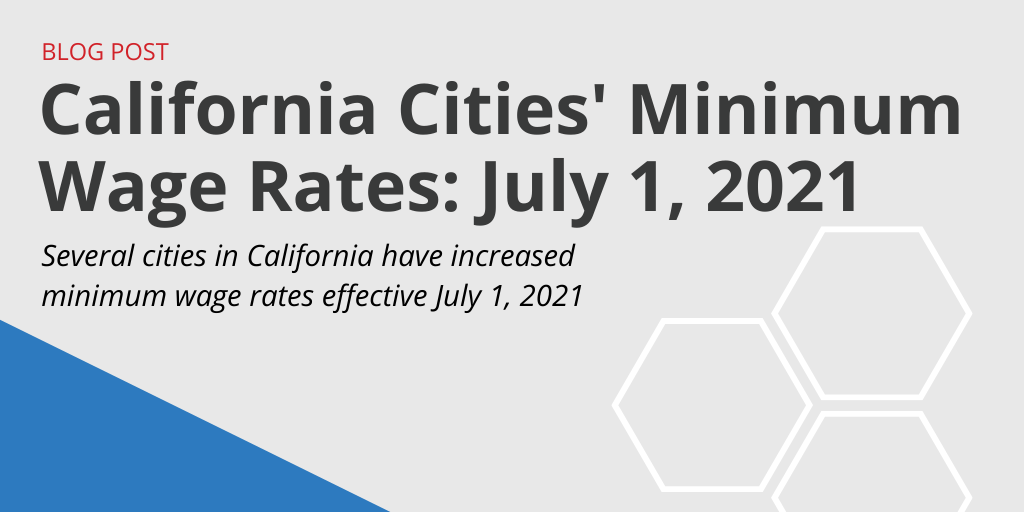 Employers with locations in California, the fifth largest economy in the world, have a number of July 1, 2021, minimum wage rates to monitor.

One thing about the July 1, 2021, minimum wage rates in California cities? They’re high. With one city surpassing a $17 standard minimum wage for the first time.

Several cities in California update rates July 1, 2021, but there are a couple of exceptions this year, including Malibu and Alameda, for example.

(Find Jan. 1, 2022, minimum wage rates for the state of California and cities that updated.)

Still, employers with locations in California, the fifth largest economy in the world, have a number of minimum wage rates to monitor. Also, note that California does not allow employers to take tip credits.

Before getting to the midyear 2021 list of rate increases for California cities, there are a few jurisdictions to call out.

Alameda’s minimum wage also remains the same at $15 and will be adjusted based on the CPI, effective July 1, 2022. San Leandro’s minimum wage will remain at $15 and does not have an expiration date at this time.

While California has long been ahead of the curve when it comes to minimum wage increases, the trend of jurisdictions setting new rates continues.

Plus, the Biden administration has made a federal minimum wage bump a priority, though it has yet to gain much traction. The federal rate has not increased since 2009, the longest stretch in the nation’s history.

Meanwhile, the Fight for $15 movement, which began in 2012, has grown. Several states are on track to reach a $15 minimum wage in the coming years, and lawmakers across the U.S. have been pushing for increases, including Pennsylvania, Delaware, Ohio and others.

Lastly, the COVID-19 pandemic put an emphasis on low-wage workers, which has further added to discussions on minimum wage.

Can Employees Discuss Pay and Salaries?
Scroll to top