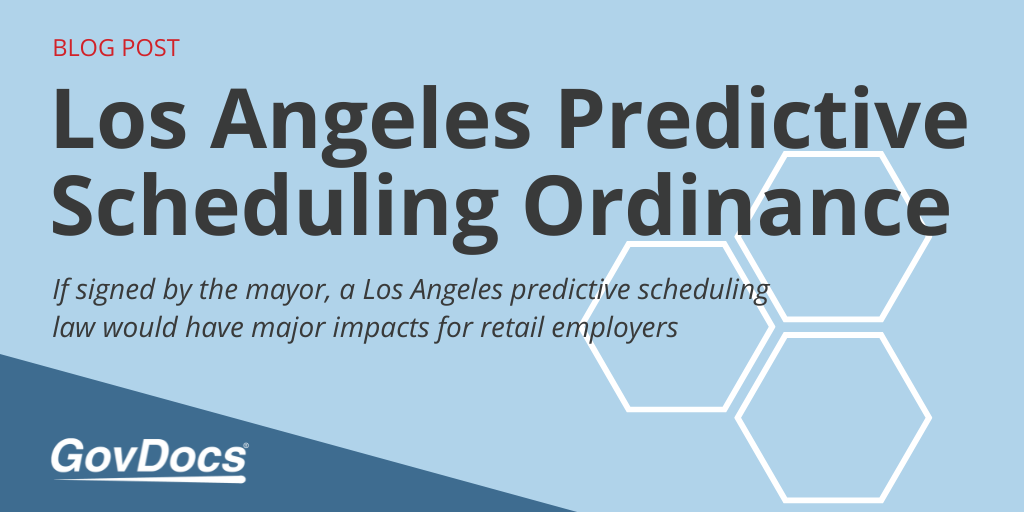 Retail employers with locations in Los Angeles should keep an eye out for the mayor’s signature and the potential implementation of the city’s predictive scheduling ordinance.

While it awaits the mayor’s signature for final approval, a Los Angeles predictive scheduling law would have sweeping ramifications for employers in the retail sector. (Los Angeles officials estimate more than 140,000 of city residents work retail jobs.)

A labor law poster requirement is also part of the ordinance, along with notice and recordkeeping obligations.

If passed, it would go into effect April 1, 2023, and apply to retail employers with at least 300 employees globally.

At a high level, the predictive scheduling law in Los Angeles mirrors many others that have been passed across the country. It is fairly broad, however.

If approved, the Los Angeles predictive scheduling law would require many retail employers to:

The advance notice of schedules can be posted in a conspicuous place or sent electronically, according to the ordinance as written. But any changes to work schedules — including a location change — must be made in writing, and employees would have the right to decline the request. If an employee accepts the change, it too must be in writing.

Meanwhile, employees would also have the right to request changes to their work schedule. An employer may accept or decline the request, provided that the employer notifies the worker, in writing, of the reason for any denial.

Other notable portions of the Los Angeles predictive scheduling ordinance include:

Lastly, when an employee has agreed to a change in their work schedule, the employer would have to compensate the worker with one additional hour of pay.

Do you know what “clopening” is?

It’s when an employee works the closing shift one day and the opening shift the next. And it’s not allowed under certain predictive scheduling laws unless an employee agrees to it.

A number of major cities have passed fair workweek laws, including:

Increasingly, multi-jurisdiction employers must manage the intricacies of predictive scheduling, which is aimed at giving employees more work-life balance and requiring employers to provide work schedules ahead of time (along with other obligations).

Retail employers with locations in Los Angeles should keep an eye out for the mayor’s signature and the potential implementation of the city’s predictive scheduling ordinance.

It is broad in terms of its requirements. And employers may want to review their current scheduling practices to determine how they would need to be updated to align with a predictive scheduling law in Los Angeles.