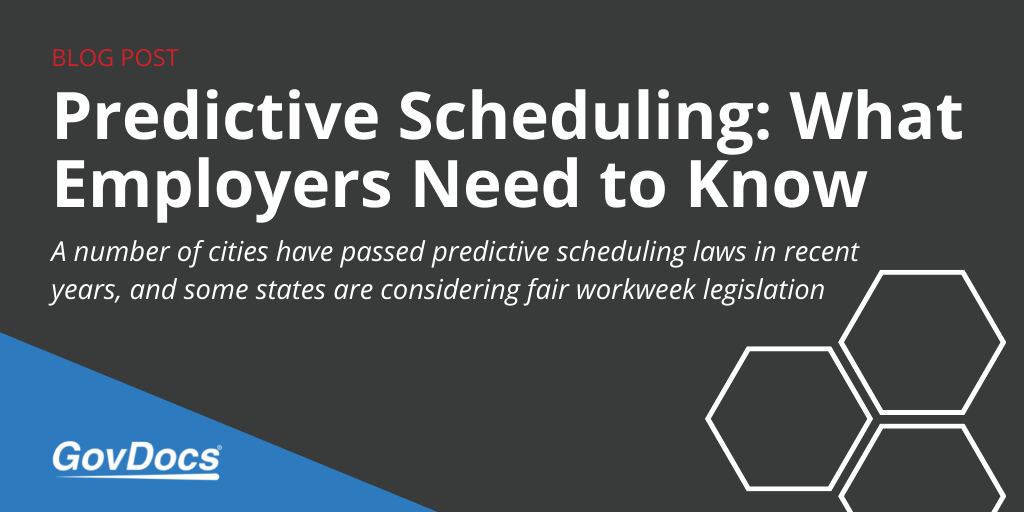 Increasingly, employers have to manage the intricacies of predictive scheduling, which is aimed at giving employees more work-life balance and requiring employers to provide work schedules ahead of time.

Do you know what “clopening” is?

It’s when an employee works the closing shift one day and the opening shift the next. And it’s not allowed under certain predictive scheduling laws unless an employee agrees to it.

Predictive scheduling has become more common over the past decade, with Oregon being the first (and so far only) state to pass such a measure in 2017. But even before that time, smaller jurisdictions enacted predictive scheduling laws, which can go by other names, such as fair workweek, for example.

Plus, a couple of major U.S. cities — Chicago and Philadelphia — have recently passed predictive scheduling laws.

Increasingly, employers have to manage the intricacies of predictive scheduling, which is aimed at giving employees more work-life balance and requiring employers to provide work schedules ahead of time.

However, there are additional requirements and nuances for employers to know about predictive scheduling across the jurisdictions that have them.

What is Predictive Scheduling?

As a refresher, these laws mostly apply to businesses in the retail, food and hospitality industries. At a high level, predictive scheduling requires employers to post work schedules in advance, generally 14 days.

Some laws are more restrictive than others, with additional obligations for employers, including:

Each jurisdiction handles predictive scheduling laws differently, adding yet another layer to the employment law compliance puzzle. (And they also require a related labor law posting.)

Oregon was the first state to pass a predictive scheduling law. Unlike other employment law trends, other states have not followed suit, though New Hampshire and Vermont have less involved scheduling-related laws.

In Oregon, the predictive scheduling law applies to employers in the retail, hospitality and food industries with 500 or more employees worldwide. The law requires employers to:

Lastly, employers should also know that smaller jurisdictions are barred from passing predictive scheduling laws in:

Unlike predictive scheduling at the state level, there are several cities with such laws.

Employees are covered if they make less than $26 an hour or $50,000 a year, and the employer has at least 100 employees globally (250 employees and 30 locations for a restaurant).

Possibly taking the crown as the most employee-friendly city in the U.S., Emeryville, Calif., has a predictive scheduling law, which it calls the Fair Workweek Ordinance.

Under the Emeryville Fair Workweek Ordinance, employers must provide work schedules two weeks in advance, as well as:

The ordinance went into full effect, including enforcement and fines, in 2018.

New York’s predictive scheduling law went into effect in 2017 and survived a legal challenge this spring.

Applying to larger retail and fast food employers, the city has different rules depending on the industry.

For fast food employers in New York City, they must:

Also, employers cannot fire or reduce the hours of a worker by more than 15 percent without just cause or a legitimate business reason, and employers must reinstate laid off employees by seniority when hours become available.

The Philadelphia Fair Workweek Employment Standards Ordinance was initially set to go into effect Jan. 1, 2020, but was delayed until April 1 last year.

The ordinance applies to businesses in the retail, food and hospitality industries with 30 or more locations nationwide (including franchises and chains) and 250-plus employees, which includes part-timers.

In Philadelphia, the ordinance requires:

Also, workers can request a schedule change without fear of retaliation. The ordinance does not cover independent contractors, and employees covered by a collective bargaining agreement may waive the requirements.

San Francisco’s predictive scheduling ordinance applies to all retail employers with at least 40 locations worldwide and 20 or more employees in San Francisco.

Also, an employer is considered a retail business if it maintains an array of merchandise, standardized décor and color scheme, uniform apparel, standardized signage, or a trademark. Because of this broad description, some food establishments may also qualify under the ordinance.

Employers must provide schedules two weeks in advance, as well as:

Meanwhile, employers must treat part- and full-time employees equally regarding wages, time off and promotion eligibility.

Also, wrapping up California cities, San Jose’s predictive scheduling law is not as expansive as those in Emeryville and San Francisco, but it does require employers to offer additional work to current part-time workers before hiring another employee.

In Seattle, the city’s Secure Scheduling Ordinance covers hourly employees at retail and food service establishments with 500 or more employees worldwide, as well as full-service restaurants that have 40 or more locations worldwide.

Jurisdictions That Have Considered Predictive Scheduling

Several jurisdictions have examined predictive scheduling laws. While some legislation has failed and others are pending, as a heads-up to employers, here is a list:

Also, Bellingham, Wash., has a fair treatment of hourly/gig workers set to go before voters on the November 2021 ballot.

Summer is a particularly noteworthy time of year for predictive scheduling laws. Busy cafes and shops, and people out enjoying the weather, adds up to a need for more employees — and the compliance challenges that come with them.

As always, employers should research the employment laws that may impact their locations. It can be challenging to monitor all the updates, from labor law postings to minimum wage and paid leave, as well as pre-employment hiring regulations and more.

More Stories From Employment Law News
Do I Need to Buy Labor Law Posters Every Year?