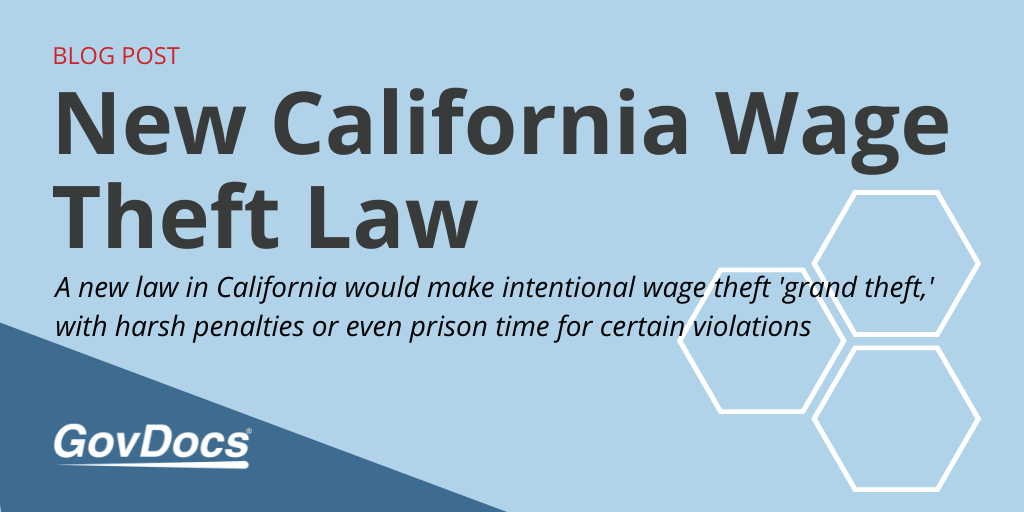 Passed in late September 2021, the new law would allow prosecutors to determine whether an employer could be charged with a misdemeanor or felony for intentionally committing theft of wages, benefits, tips or other compensation:

Because intentional wage theft would be considered a new type of grand theft, employers found in violation could also face jail time or even be sent to prison in certain circumstances.

The law authorizes wages, gratuities, benefits, or other compensation that are the subject of a prosecution under these provisions to be recovered as restitution in accordance with existing provisions of California law.

Even before last month, California already had strong wage theft laws on the books.

The California Equal Pay Act has been in existence for decades, followed by the Wage Theft Protection Act of 2011 and the 2015 signing of the California Fair Pay Act.

Employers can face liens on property for unpaid back wages, and the state has provided resources for employees and allows broad leeway for state investigative authorities.

With the rise of minimum wage laws in recent years, wage theft— intentional or not — has become more of an issue for employers. It can take many forms in terms of wage and hour laws, including:

Chicago’s new wage theft law went into effect Aug. 1, 2021. Employers can be found in violation for:

Most employers don’t set out to commit wage theft. But it still happens.

And California’s response to intentional wage theft could open the door for more employee complaints. Employers should continually review their policies and practices to ensure they are not found in violation of the law, in California and elsewhere.