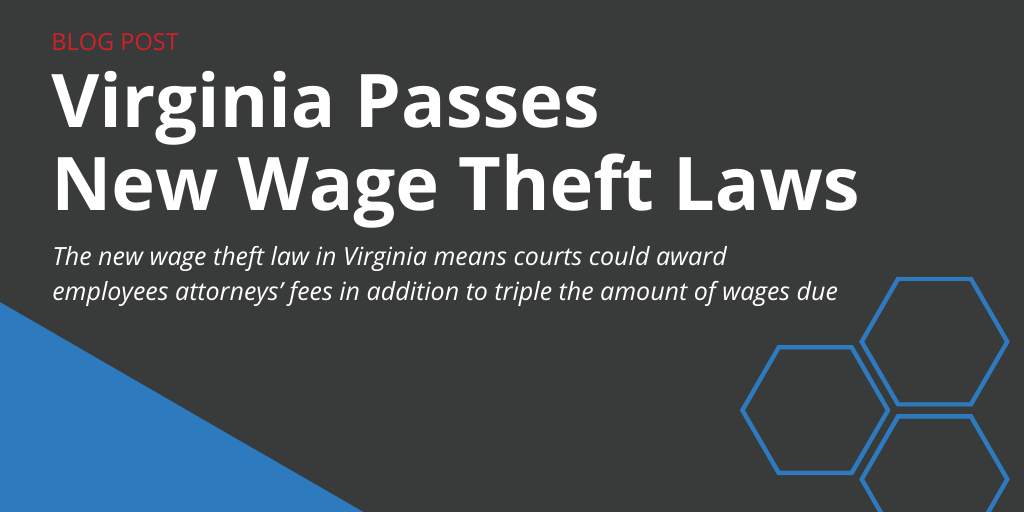 Across the U.S., a renewed emphasis on employee rights has created a number of compliance hurdles for companies. Minimum wage laws continue to be enacted, and with those come wage theft laws to ensure workers are being paid correctly.

The major components of the new Virginia wage theft legislation are as follows:

Under House Bill 123, if a court determines an employer deliberately failed to pay an employee’s appropriate wages, the employee could be entitled to attorneys’ fees in addition to triple the amount of wages due.

Meanwhile, Senate Bill 838 creates a “private cause of action” for employees to recover unpaid wages, and also makes general contractors liable and subject to wage theft penalties under certain conditions.

Another piece of legislation gives the state’s Department of Labor and Industry more oversight authority.

Lastly, House Bill 337 and Senate Bill 48 protect from retaliation workers who report wage theft or file a complaint against their employer.

Across the U.S., a renewed emphasis on employee rights has created a number of compliance hurdles for companies. Minimum wage laws continue to be enacted, and with those come wage theft laws to ensure workers are being paid correctly.

Some employment law experts predict an increasing number of bills related to wage theft to come before lawmakers, especially because it’s not a politically divisive topic. Employers in certain industries in particular — construction, for example — should keep an eye out for new wage theft laws.

Another item employers should consider is the recent enaction of Virginia’s new minimum wage law, whose implementation date was pushed back due to economic concerns over the coronavirus.

It was initially slated to go into effect Jan. 1, 2021. But the governor amended the legislation, and it will now take effect May 1, 2021.

The new rates will go up on Jan. 1 following the initial increase next May, at which point the minimum wage in Virginia will move from the federal level to $9.50. After that, they will be:

In December 2023, state agencies will review what a regional minimum wage structure would look like in Virginia.