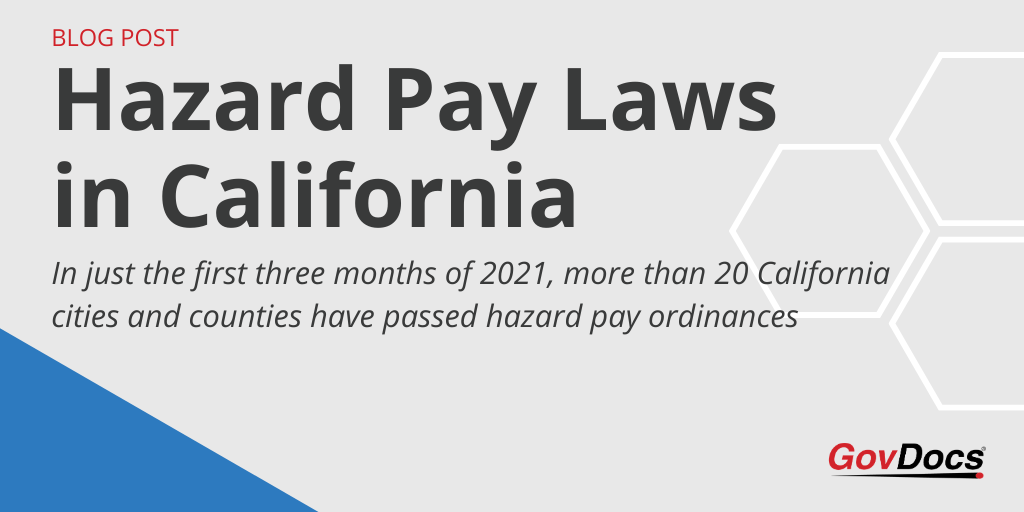 In just the first three months of 2021, more than 20 California cities and counties have passed hazard pay ordinances.

Since the onset of the COVID-19 pandemic, hazard pay has taken on a new dimension. That’s especially true with hazard pay laws in California.

Generally, hazard pay is “additional pay for performing hazardous duty or work involving physical hardship” according to the U.S. Department of Labor. Historically, it has been associated with physically difficult work like mining, construction, dangerous jobs in the military, etc.

Hazard pay for certain front-line and essential workers was provided early on when the pandemic hit.  However, much of that additional pay ended last summer.

The HEROES Act proposed last year did include federal funds to provide hazard pay, but the measure did not pass. And as we have seen before — particularly with minimum wage and paid leave — states and cities step in when the federal government does not act.

Recently, we have seen a steady influx of California cities passing temporary hazard pay ordinances, which generally require large grocery and/or drug stores to pay workers additional hazard pay for the increased risk of exposure to COVID-19 that comes from doing their jobs.

In just the first three months of 2021, more than 20 California cities and counties have passed hazard pay ordinances. Most have an associated labor law posting.

We expect this activity to continue at the city level in California. Let’s look at what we know right now.

The COVID-19 pandemic has impacted employment law in ways many of us never imagined.

New and updated paid leave laws, hazard pay, workplace safety mandates… the list of items employers have had to cope with over the past year seems nearly endless. And while the special hazard pay rates in California will eventually come to an end, the spotlight on more robust employment laws will likely continue.

It’s incumbent upon employers to stay on top of these changes as the lasting effects of COVID-19 come to fruition in the future.