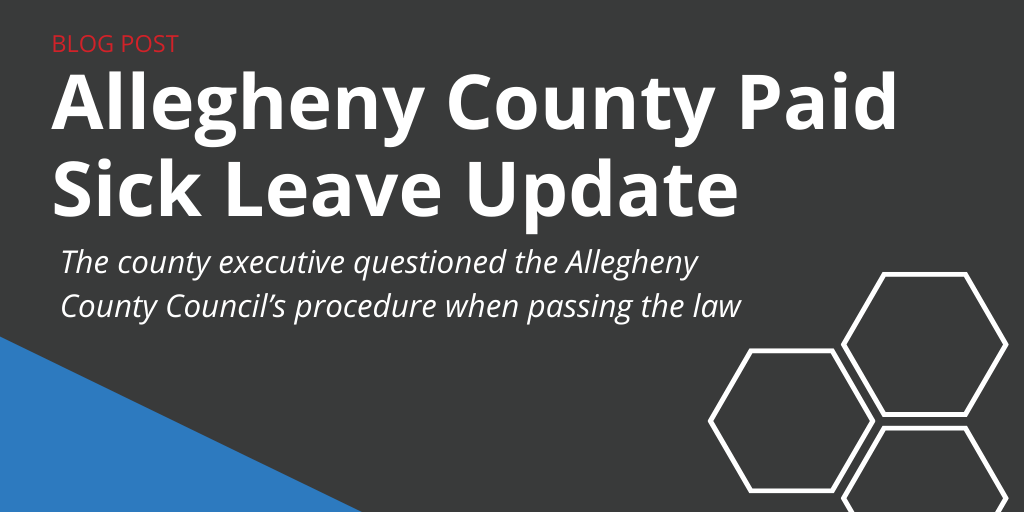 As initially passed, paid sick leave in Allegheny County would apply to employers with 26 or more workers.

The executive of Allegheny County earlier this month vetoed a paid sick leave law the county council passed on March 9.

But the veto wasn’t based on the ordinance itself. Instead, County Executive Rich Fitzgerald vetoed the measure because of a procedural issue.

Fitzgerald wanted to ensure the ordinance, the Paid Sick Days Act, would be able to hold up against potential legal challenges.

“This issue is too important to our community, and particularly to those workers who would have protection in the form of paid sick leave, for it to be done the wrong way,” the Fitzgerald letter reads, according to a release from the county. “It’s simply not fair to give employees in our county false hope that they’re protected when the process followed by council jeopardizes that. …  If we want to protect our residents, families, community and public health, we must do this in the right way to ensure that it withstands any legal challenge.”

The home of Pittsburgh, Allegheny County is the second-largest county in Pennsylvania by population.

As initially passed, paid sick leave in Allegheny County would apply to employers with 26 or more workers. Employees, meanwhile, would accrue one hour of paid sick leave for every 35 hours worked, with a cap of 40 hours.

The paid sick leave could be used for an employee’s illness, treatment or preventative care. Those same standards apply should the employee need to care for a family member.

Also — as has been the case with new and updated paid leave laws during the COVID-19 pandemic — the closure of an employee’s place of business or child’s school or place of care due to a public health emergency is a qualifying reason for using leave.

There would also be a 90-day waiting period before employees in Allegheny County could use paid sick leave. Carryover would be allowed unless the employer opts to frontload the paid sick leave.

The veto message from the Allegheny County executive did state his support of a paid sick leave policy.

“There are many reasons that such a policy makes sense. Quite simply, we don’t want people going to work who are contagious,” he wrote. “Millions of people in this country, and thousands in our own community, do not have paid sick days to care for their own health. For many, particularly those earning the lowest wage, the decision to stay home or go to work when sick isn’t really a decision. In order to pay their bills, they must work – and so they go to work ill, including with contagious illnesses that threaten public health. When you look at how this impacts communities of color, the statistics are more staggering. According to the National Paid Sick Days Coalition, more than half (54 percent) of Latinx workers do not earn a single paid day and 38 percent of Black workers have no access to paid sick days.”

In a memo, the county solicitor relayed the Allegheny County Law Department’s concerns with the process being used to pass the paid sick leave legislation. Rather than the process the council used, he said the regulation should have been put in place following the provisions of the Local Health Administration Law, according to the release.

The Allegheny County Council postponed its latest meeting. It was rescheduled for March 30.

The comments from the Allegheny County executive highlight the growing support among government officials for the need for paid leave.

More jurisdictions are proposing new paid leave laws across the U.S., and many have updated existing laws in the case of a future public health emergency.

Employers with locations in many different states should take note of this changing landscape to ensure compliance with the latest laws and regulations.