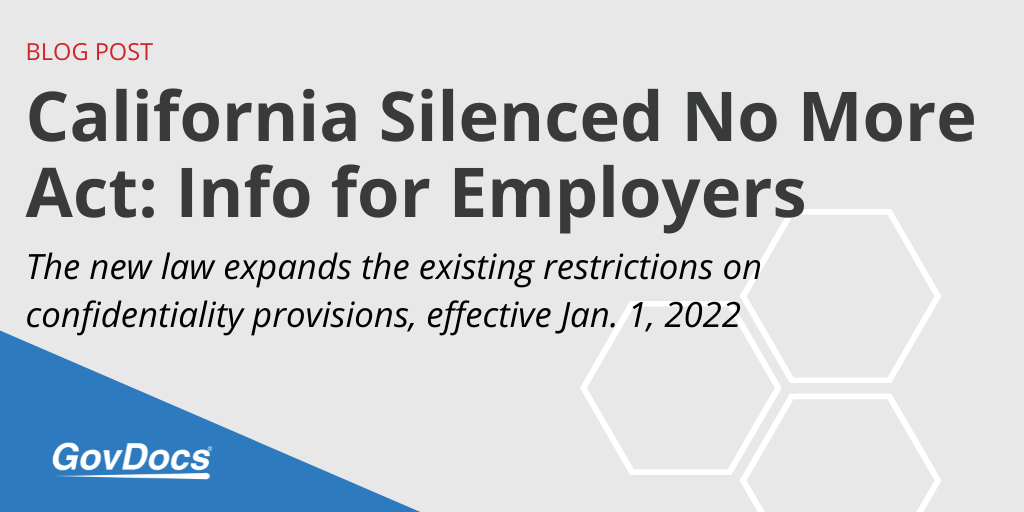 Essentially, the new law expands the existing restrictions on confidentiality provisions put into place by SB 820, which barred settlement agreements relating to claims based on sex.

The California “Silenced No More Act” was recently signed into law by Gov. Gavin Newsom.

SB 331 prohibits separation agreements that bar the disclosure of information about unlawful acts in the workplace, specifically related to:

Essentially, the new law expands the existing restrictions on confidentiality provisions put into place by SB 820, which barred settlement agreements relating to claims based on sex.

When it comes to settlement agreements in California, they cannot restrict someone from disclosing the underlying factual information relating to all claims of harassment, discrimination, or retaliation under the California Fair Employment and Housing Act.

“Nothing in this agreement prevents you from discussing or disclosing information about unlawful acts in the workplace, such as harassment or discrimination or any other conduct that you have reason to believe is unlawful.”

However, there is an exception. Severance agreements can prohibit a former employee from disclosing that information if the provision is part of an agreement to resolve an employment discrimination claim that the employee has filed in court, “before an administrative agency, in an alternative dispute resolution forum, or through an employer’s internal complaint process,” and the employee was given notice and an opportunity to retain an attorney or was represented by an attorney.

Also, employers must give current workers or former employees least five days to consider a severance agreement, as well as informing them that they have the right to speak with a lawyer regarding the agreement.

Finally, the California Silenced No More Act does allow employers to bar employees from discussing trade secrets, proprietary information, etc., as long as it does not include those unlawful acts.

The #MeToo movement has continued to reverberate in the world of employment law. California’s Silenced No More Act is just the latest example.

Employers with locations in California should review the policies and procedures related to separation agreements to ensure they align with the new law before it takes effect Jan. 1, 2022.