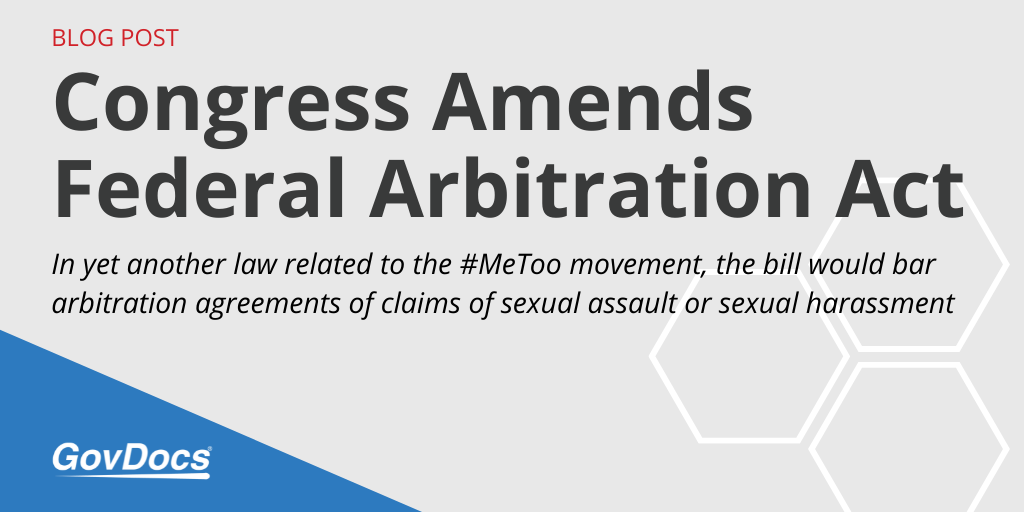 The law would allow employees who allege sexual assault or harassment to have the dispute decided by a court, even if they previously signed a forced arbitration agreement.

Congress recently passed a bill that would amend federal law to bar forced arbitration agreements regarding claims of sexual assault or sexual harassment in the workplace.

Expected to be signed by President Biden, the amendment to the Federal Arbitration Act would also ban waivers of the right to bring these types of claims forward.

The law would allow employees who allege sexual assault or harassment to have the dispute decided by a court, even if they previously signed a forced arbitration agreement.

Notwithstanding any other provision of this title, at the election of the person alleging conduct constituting a sexual harassment dispute or sexual assault dispute, or the named representative of a class or in a collective action alleging such conduct, no pre-dispute arbitration agreement or pre-dispute joint-action waiver shall be valid or enforceable with respect to a case which is filed under Federal, Tribal, or State law and relates to the sexual assault dispute or the sexual harassment dispute.

The legislation essentially amends federal law regarding disputes involving sexual assault and sexual harassment “in order to stop employers and businesses from forcing employees and customers out of the court system and into arbitration,” Biden said in a statement.

“This legislation advances efforts to prevent and address sexual harassment and sexual assault, strengthen rights, protect victims, and promote access to justice,” he said. “The Administration is committed to eliminating sexual harassment and assault, and looks forward to working with the Congress on the Ending Forced Arbitration of Sexual Assault and Sexual Harassment Act as it proceeds through the legislative process. The Administration also looks forward to working with the Congress on broader legislation that addresses these issues as well as other forced arbitration matters, including arbitration of claims regarding discrimination on the basis of race, wage theft, and unfair labor practices.”

It would ensure that pre-dispute arbitration clauses and waivers of the right to bring joint actions in cases of sexual assault or sexual harassment would not be valid or enforceable for cases that are filed under federal, tribal or state law.

The #MeToo movement continues to spark new employment laws across the U.S.

Legislative responses to #MeToo can take many forms, including:

In addition to these types of laws, there are other considerations for employers as they navigate this new landscape. Interesting legislation has developed regarding confidentiality in settlement agreements, non-disclosure provisions and testifying.

Meanwhile, with the president’s signature on the amended Federal Arbitration Act seeming eminent, employers may want to review their practices to ensure compliance.