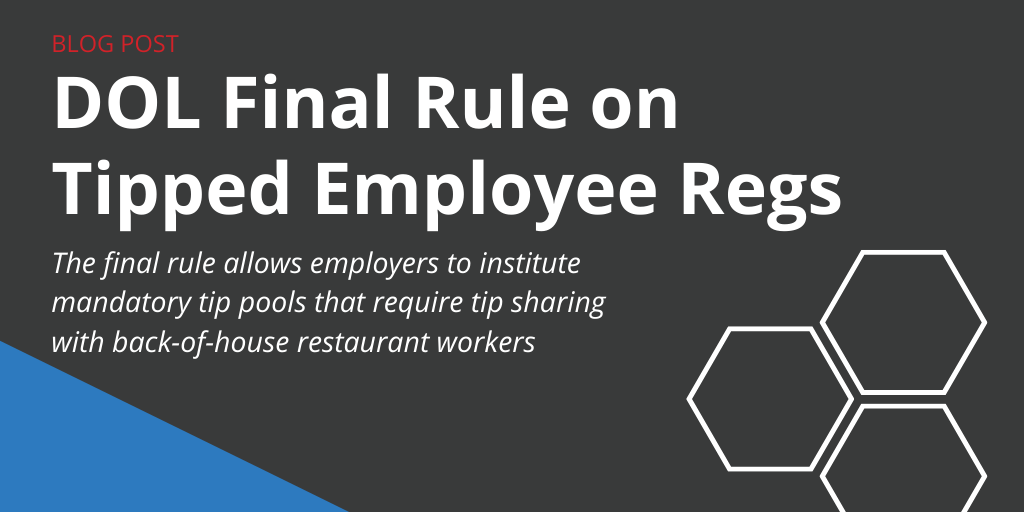 The U.S. Department of Labor on Dec. 22, 2020, announced a final rule that expands tip-pooling policies.

Essentially, it allows employers that do not take a tip credit to institute mandatory tip pools that require tip sharing with back-of-house restaurant workers.

“This final rule provides clarity and flexibility for employers and could increase pay for back-of-the house workers, like cooks and dishwashers, who have been excluded from participating in tip pools in the past,” Wage and Hour Administrator Cheryl Stanton said in a release. “Newly allowed tip sharing may incentivize the inclusion of these previously excluded workers and reduce wage disparities among all workers who contribute to customers’ experience.”

Primarily focused on the food industry, the final rule also:

The final rule goes into effect 60 days after it is published in the Federal Register, which will likely be sometime in February.

The final rule addresses amendments made to the Fair Labor Standards Act (FLSA) through the Consolidated Appropriations Act (CAA) of 2018.

It will only apply to restaurants that do not take a tip credit to pay servers and others a subminimum wage, so long as the state where the establishment is located does not have a ban on tip pools.

While the CAA didn’t impact regulations regarding the tip credit under the FLSA, it did remove restrictions on a company’s “ability to require tip pooling when it does not take a tip credit and instead pays tipped employees the full minimum wage in direct wages,” according to the DOL.

Now, employers can implement mandatory tip pools for workers who may not traditionally receive tips, such as dishwashers and cooks.

Other provisions of the final rule:

A recent GovDocs webinar, Get Ready for 2021: Minimum Wage News and Trends, provided a thorough look at minimum wage across the U.S. And that includes tipped wages.

The coronavirus pandemic has hit the restaurant industry especially hard, with 83 percent of restaurant service workers saying tips have decreased in the wake of COVID-19.

Meanwhile, seven states do not have a separate rate for tipped employees and lawmakers in five others have introduced legislation to do away with a tipped rate.

Also, some states have taken specific measures to help tipped employees. The New Jersey Department of Labor has adopted new regulations with more protections for tipped workers. New York State’s tip credit for workers who under the Miscellaneous Industry is eliminated by end of 2020.

Employers in the restaurant industry should examine the parameters of the new final rule to determine whether it makes sense to take advantage of the changes.