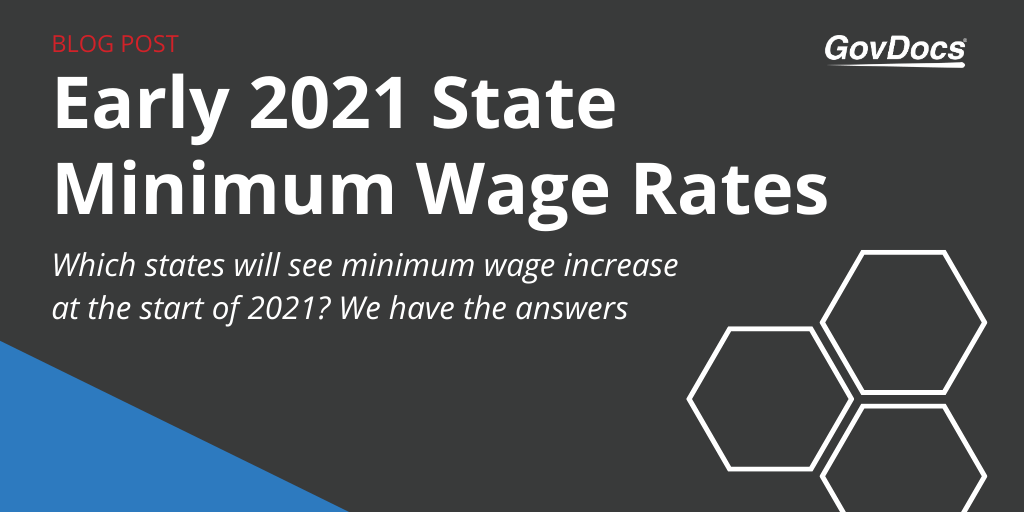 Nearly 20 states will increase minimum wage at the start of 2021. Employers should audit their locations to ensure they are paying the correct minimum wage.

What are the early 2021 state minimum wage rates?

The busiest time of year for minimum wage increases is Jan. 1, when most states with rates above the federal level go up. (Most will also require an updated labor law posting.)

All told, 19 states will have new minimum wage rates at the beginning of 2021. Here they are.

In Alaska — which does not have a different rate for tipped employees — the law calls for annual increases to its minimum wage based on the Consumer Price Index (CPI).

The minimum wage in Arizona is tied to a successful 2016 ballot measure.

However, scheduled increases ended in 2020, with future rates indexed in line with the CPI.

Another state where rate increases were set through the ballot box, Arkansas minimum wage will go up a dollar, to $11 in 2021.

As one might expect, California is among the states with the highest minimum wage.

The rates are different based on company size in California, where there is no separate wage rate for tipped employees. In 2021, they will be:

Also notable for employers, minimum wage in California in 2022 will reach $15 an hour for large employers.

In Colorado, the 2021 minimum wage increase was indexed per the CPI. There will be small bumps for 2021:

Employers should also know that Colorado last year gave cities the ability to set their own rates, removing a previous preemption.

Employers in Florida should take special note of minimum wage rates in 2021.

First, the state has an indexed increase set for Jan. 1:

However, voters in November 2020 passed a ballot initiative to eventually bring Florida’s minimum wage to $15 an hour. The first increase will come on Sept. 30, 2021, bringing minimum wage in Florida to $10.

Still, the tip credit remains the same — $3.02. That means the tipped employee wage will always be the regular minimum wage less that amount.

Since the signing of a 2019 bill, Illinois has been on scheduled minimum wage increases. Somewhat oddly, the state’s first increase was Jan. 1, 2020, with a second increase in July of that year.

For 2021, minimum wage will have a single increase, with rates being:

Illinois also has a separate rate for youth working fewer than 650 hours per calendar year. That will be $8.50 in 2021.

With an indexed increase for 2021 following scheduled bumps to its minimum wage, Maine’s 2021 rates will be:

In Maryland, there’s a new minimum wage wrinkle for employers.

For the first time in 2021, the state will have separate rates for large and small employers:

No increase is planned for employees who receive tips. It will stay at $3.63.

Massachusetts is another state that will eventually see a $15 minimum wage (2023).

The rates for 2021 were scheduled in Massachusetts and will grow to:

Modest minimum wage increases are set for 2021 in Michigan, with CPI-directed increases going to:

UPDATE: State officials announced Dec. 11, 2020, that Michigan’s minimum wage increase is not expected to go into effect on Jan. 1, 2021, due to high unemployment numbers.

Home of GovDocs, Minnesota has its minimum wage rates tied to the size of the employer, but it’s not based on number of workers.

In 2021, minimum wage rates in Minnesota are:

Both rates were increased via the CPI. There is no separate minimum wage for tipped workers in Minnesota.

Following a 2018 voter-approved minimum wage increase in Missouri, the state’s scheduled rate for 2021 is:

Minimum wage for tipped workers in Missouri will be half the regular rate: $5.15.

In Montana, the state will see some of the smallest increases among states for 2021.

Minimum wage in 2021 for both tipped and non-tipped employees is $8.75, as Montana does not allow tip credits.

The state’s minimum wage is based on employer size. For 2021, that means:

Meanwhile, the 2021 minimum wage for tipped employees in New Jersey is $4.13. (There is also a separate rate for agricultural employees.)

One of many states that passed a 2019 minimum wage law, New Mexico has planned increases for 2021.

New Mexico has been aggressive with its annual increases, with 2021 rates set at:

The increase for tipped workers isn’t as severe, but New Mexico leads the way with a $1.50 per hour increase for 2021.

New York is also the most diverse among states in how it assigns minimum wage rates. In 2021, the rates are:

Ohio has three minimum wage rates: large and small employers, and for workers who receive tips.

Again, like Minnesota, the definition of large or small employers is tied to gross receipts. In Ohio, a large employer has $323,000 more in gross receipts.

Minimum wage increases are indexed in South Dakota, where 2021 rates are:

The odd figure for tipped employees is tied to South Dakota law (So. Dak. Stat. 60-11-3.1), which indicates that the tipped employee wage shall be no less than 50 percent of the minimum wage. In this case, instead of rounding it, the state let it go out to three digits.

Finally, we come to Washington.

There is no separate minimum wage for tipped employees in Washington.