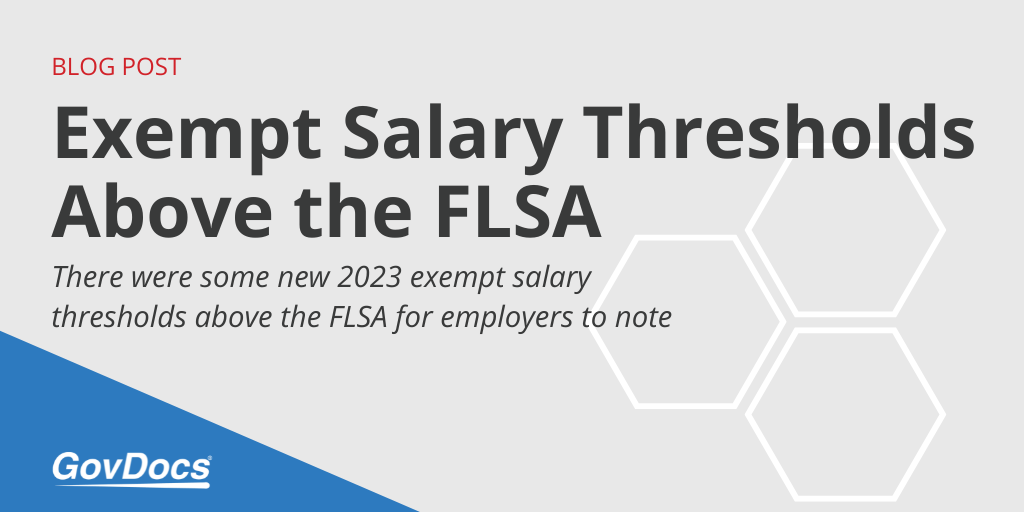 Employers that operate across the U.S. have plenty of wage and hour issues to monitor. And exempt salary thresholds are part of that complex matrix.

While the Fair Labor Standards Act sets a federal threshold for salaried (exempt) employees, several states have their own regulations.

As a reminder, under the (FLSA), all employees must be paid at least minimum wage plus overtime for all hours worked. However, the FLSA provides an exemption from minimum wage and overtime pay for employees who work as executive, administrative, professional and outside sales employees.

To qualify for the exemption, employees must meet certain tests regarding their job duties and be paid on a salary basis of not less than $684 per week ($35,568 annually).

Starting with Alaska, exempt employees must be paid two times the state minimum wage for the first 40 hours worked each week, excluding board or lodging from the employer.

California, meanwhile, also stipulates that exempt employees must earn a monthly salary equivalent to no less than two times the state minimum wage for full-time employment.

But the state has two separate levels for large (26 or more employees) and small employers, as well as for workers in computer software.

Such employees who meet the duties requirements must be paid a salary of at least $112,065.20 annually or $53.80 per hour to be considered exempt.

It’s also worth noting that Colorado’s standard threshold will increase in 2024, with an indexed increase slated for 2025.

New York City and Nearby Counties

Lastly, if computer professionals in Washington are paid on an hourly basis and meet the duties requirements, they must be paid at least $55.09 per hour to be considered exempt (3.5 times the state’s minimum wage).

As mentioned above, to qualify for exemption, employees generally must meet certain tests regarding their job duties and be paid on a salary basis.

The U.S. Department of Labor outlines the categories and the tests that must be met under the federal FLSA. Find more information from the DOL’s Wage and Hour Division, which includes exempt salary information on:

Employers that operate across the U.S. have plenty of wage and hour issues to monitor. And exempt salary thresholds are part of that complex matrix.