FAA Crew Rest Regulations: To Rest or Not to Rest 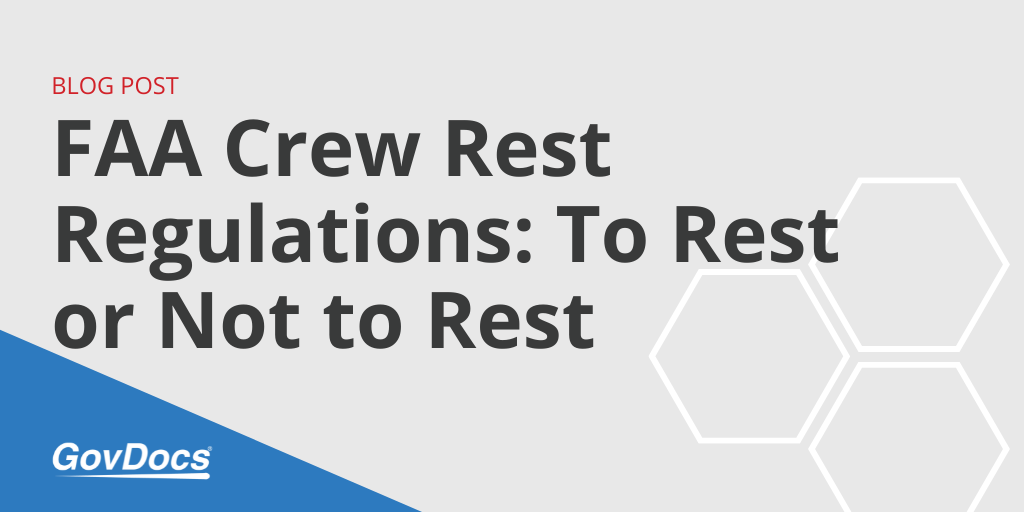 Aviation employers are no different than any other; they hire only enough pilots to get by.

Federal Air Regulations (FAR) concerning “crew rest” have been tweaked and reconfigured since the 1940s.

They may be the most byzantine rules ever devised. Just trying to make sense of them is exhausting. In 2010, FAA outlined its goal: It’s not to limit flight time, but to “…address flight time limitations and required rest periods.”

Here’s an example of the convoluted nature of those rules: this (commercial) flying must “…provide for at least 10 consecutive hours of rest during the 24-hour period that precedes the planned completion time of the assignment.” In addition, pilots must be given “…at least 13 rest periods of at least 24 consecutive hours each in each calendar quarter.”

The aviation business operates on razor-thin profits margins. Thus the foofaraw over crew rest regulations is, at heart, a money issue. Aviation employers are no different than any other; they hire only enough pilots to get by.

My experience in air medical aviation, flying a helicopter at a hospital, was instructive. In 1983, when I started, I was one of two pilots at the contract. The client hospital required that a pilot be in house 24/7. Sharing the duty with another pilot, and a week having 168 hours, meant he and I worked 84-hour weeks. The company had no interest in hiring more pilots since the contract stipulated a set amount for salaries.

Like at a lot of other hospital contracts at that time, with all pilots working half their lives, crew rest became a point of contention between the employers, clients and FAA. Definitions got in the way. The boss said if we weren’t flying, we were “at rest,” even inside the hospital. The federal government said if we were inside the hospital we were on duty. This tennis match went on for years.

At times, it seemed crew rest in the air med business was unregulated. In a turnaround, partly because of a spate of accidents in air med aviation, that industry is now one of the most highly regulated as to crew rest, working under FAR part 135.261 through 135.273, and typically, four pilots are on staff.

One reason for all the FAA tweaking, etc., is the varied nature of “commercial flying.” Single-pilot crew, or two-pilot? Scheduled operation, or on-call? What is “duty time”? What is “rest”? Adjustments to the regs have been proposed to clarify things, such as one by National Air Transportation Association (NATA) emphasizing the use of so called “science-based fatigue principles.” A proposal by the National EMS Pilots Association (NEMSPA) is for crew members to call “time out” if they’re fatigued, and to do so with impunity.

Here’s the gist of it: a pilot may log more than 500 hours per quarter, no more than 800 in two consecutive quarters. Late landings require extended “rest” periods. Per-week, per-quarter and annual flight time is limited. But the regulation states flight time as a simple function of rest time, which is the intent.

Like any FAA regulation, the first line says it all. “No employer may assign a pilot to duty beyond crew rest requirements…” But to continue, quoting the pilot part, “…no flight crew member may accept an assignment…” In other words, if you tell the boss you won’t take an assigned trip, you may be legal, but you may be unemployed, too.

Byron Edgington ATP is a retired pilot with 12,500 logged hours in twenty different types of commercial and military helicopters. Edgington is the author of “The Sky Behind Me, a Memoir of Flying and Life,” available at Amazon and Biblio Publishing. He lives in Columbus, Ohio, and is a well-rested writer.