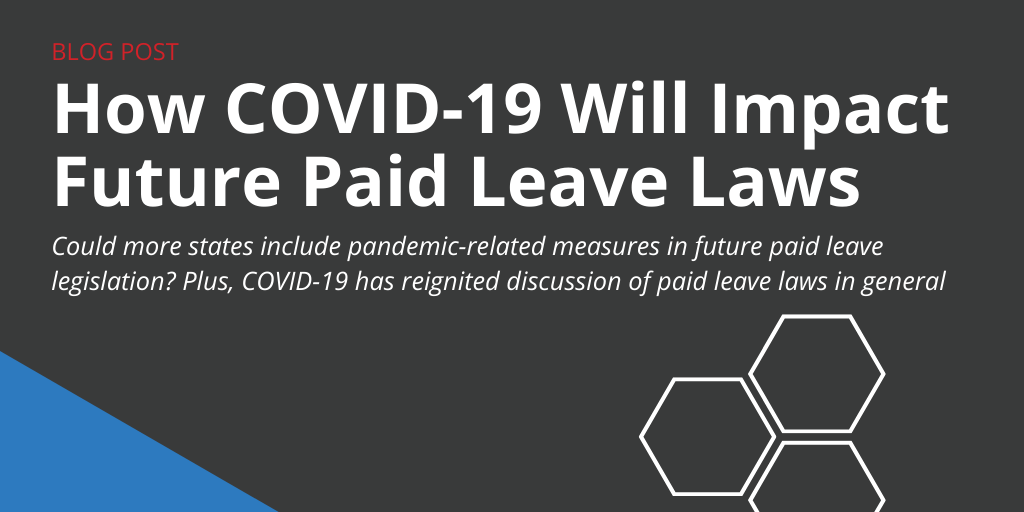 Could more states include pandemic-related measures in future paid leave legislation? Plus, COVID-19 has reignited discussion of paid leave laws in general.

As the nation continues to combat the impacts of COVID-19, new emergency paid leave laws have sprouted up across the country. From federal to local levels of government, many of these laws are temporary. But what about the future of paid leave after the pandemic?

Here, we will explore some of the immediate impacts of COVID-19 on paid leave laws across the country and what these measures could mean for paid leave laws in the future.

In the months following the outbreak of the coronavirus, jurisdictions moved swiftly to alleviate the concerns of employees who would have to miss work due to COVID-19.

The most notable, of course, is the Families First Coronavirus Response Act (FFCRA). It marked the first time the federal government provided paid leave.

Of course, the legislation is only in effect until Dec. 31, 2020, and only covers employers with fewer than 500 workers.

This is where other jurisdictions stepped in. Take Los Angeles, for example. The city passed an ordinance in response that covered companies with 500 or more employees.

Elsewhere, several cities and states expanded existing paid sick leave (PSL) laws to include workers who must miss time due to COVID-19, California, New Jersey, Philadelphia and San Francisco among them. New Jersey also permanently expended its paid family leave laws to cover employees in the event of a school or work closure.

Others, meanwhile, crafted new paid leave laws to cope with the effects of the coronavirus, including Colorado and New York, and eventually passed permanent paid sick leave laws.

Los Angeles County, San Mateo County, and the California cities of San Jose, Sacramento, Santa Rosa and Long Beach are all jurisdictions that passed COVID-19-related paid sick leave laws but do not have a permanent PSL law in place.

The California governor also issued an executive order for paid sick leave specifically for food sector employees, with the California Legislature considering a bill to make provisions of the order permanent.

But some of these new and updated laws aren’t permanent, as is the case in the California cities of San Jose and Santa Rosa. And we also want to consider how paid leave laws will look in the future.

For a glimpse at what the future may hold for paid leave laws, we can look at the legislation recently passed in Colorado.

Signed into law in mid-July 2020, it goes into effect Jan. 1, 2021, and contains a provision specifically in case of another pandemic.

Employers must provide workers an additional amount of paid sick leave during a public health emergency in an amount based on the number of hours the employee works, generally about two weeks.

The reasons for using the extra paid leave are directly tied to a public health emergency similar to the coronavirus:

While Colorado is among the more employee-friendly states in the U.S., its decision to include language related to a potential pandemic could be indicative of how such laws will be crafted in the future.

The breadth of the pandemic could prompt lawmakers in other jurisdictions to take a similar approach when creating paid leave laws.

The Future of Paid Leave

But COVID-19 has also opened the door to other discussions — the need for paid leave, and paid family and medical leave, in general.

About 25 percent of employees in the U.S. do not have paid sick leave, according to a March 2020 research report from the Pew Research Center. And only 16 percent of private sector workers have access to paid family leave through their employer, according to the Bureau of Labor and Statistics.

These figures have been put in a new light during the pandemic, reigniting calls for new paid leave laws. For employers, the implications of new legislation, and how it’s constructed, will have far-reaching implications.

The existence of paid leave laws can also influence how employees behave. Take a recent study from the Bipartisan Policy Center, for example. During the enhanced federal unemployment benefits that recently expired, 63 percent of individuals on unemployment said they would go back to work sooner if paid family and medical leave (PFML) were available. Only eight states, and Washington, D.C., have PFML laws on the books.

Though not directly related to COVID-19, there is another indication more paid leave laws could be on the horizon. Come Oct. 1, paid parental leave will be available to federal employees. Qualifying federal employees — and there are about 2 million of them — will receive 12 weeks of paid parental leave. And in the employment law pacesetting New York State, its new paid sick leave law will take effect soon.

The confluence of all these issues likely means we will see a push for more paid leave laws in the future.

The coronavirus pandemic will clearly influence new paid leave laws in the future. Exactly how lawmakers approach these laws remains to be seen.

And, of course, even before the pandemic, the number of jurisdictions considering paid leave laws had been on the rise.

Employers — still dealing with different COVID-19 regulations across the U.S. — will have to keep a close eye on paid leave laws in the future.