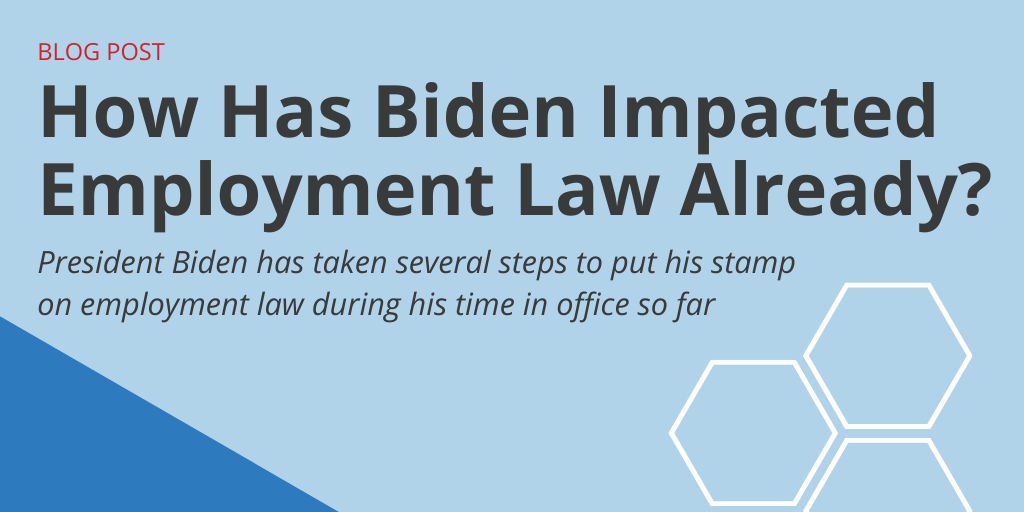 In addition to the COVID-19 stimulus package, President Biden has taken several steps to put his stamp on employment law during his time in office so far.

Since President Joe Biden’s inauguration on Jan. 20, 2021, the new administration has had sweeping impacts on employment law.

From executive orders to the COVID-19 relief package and new legislation, employers have already had plenty to keep tabs on.

Biden on Jan. 22 signed an executive order establishing that federal workers can collectively bargain for increased pay and benefits.

While no national mask mandate has been handed down, the president on Jan. 20 issued an executive order that requires federal employees and contractors to wear masks and adhere to other Centers for Disease Control and Prevention (CDC) guidelines on federal property.

While the push for a federal $15 minimum wage hasn’t gained steam in Congress and was cut from the COVID-19 relief bill, Biden in late January issued a directive for the Office of Personnel Management (OPM) to provide recommendations on increasing the minimum wage for federal employees.

While it does not create any new legislation, employers and government contractors especially will have to keep an eye on potential minimum wage bills.

The Senate passed the $1.9 Trillion COVID-19 relief plan on March 6 and, following the revised bill’s passage in the House, Biden plans to sign the bill Friday, March 12. (UPDATE: Biden signed the bill a day earlier than expected.)

One key component missing from the final bill is an increase to the federal minimum wage, which could come in the form of separate legislation. Should it eventually pass, new federal rates would likely be tiered increases until reaching $15 an hour in 2025, which was what the House previously proposed.

Under the relief bill, the amount of unemployment insurance benefits per week is $300, with an expiration date of Sept. 6, 2021.

Along with direct payments to many Americans, $50 billion has been allocated to support small businesses, including a $28.6 billion grant program for restaurants and bars.

It also includes an expansion of the Paycheck Protection Program to include additional types of companies, $15 billion for the Economic Injury Disaster Loan Program, as well as other provisions.

The U.S. Department of Labor under Biden has ended the Payroll Audit Independent Determination (PAID) Program, which was put into place in 2018.

It was designed to encourage employers to voluntarily report Fair Labor Standards Act minimum wage and overtime violations to the DOL and agree to promptly pay back wages.

But the program was underutilized. Many businesses were reluctant to report violations, while labor groups opposed it because it limited liabilities for employers.

Both chambers of Congress have introduced the Protecting the Right to Organize (PRO) Act of 2021 for debate. The U.S. House passed a version of the bill in 2020, but the Senate did not take it up.

In its current iteration, the bill targets:

Employers should watch this legislation and determine whether its passage could affect them in the future.

A new administration always brings changes to the laws and regulations that impact employers.

The rapid rise of changes over the past several weeks likely indicates further items to monitor in the coming years regarding employment law in the U.S.