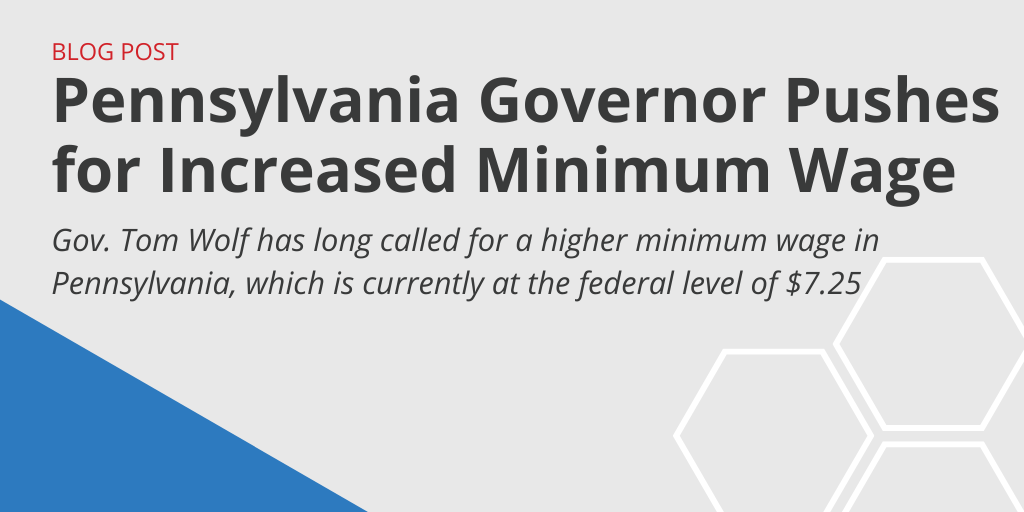 But the Pennsylvania governor has urged legislators to increase minimum wage several times in the past. It remains to be seen what will happen with minimum wage this time around.

The governor of Pennsylvania last month again called for an increase to the state’s minimum wage.

Like measures enacted in other jurisdictions across the U.S., the plan from Gov. Tom Wolf would implement scheduled increases until Pennsylvania reaches a $15 minimum wage.

Minimum wage in Pennsylvania is currently at the federal level of $7.25. Neighboring states, including New York, New Jersey and Maryland, all have rates above the federal figure, which has been unchanged for more than a decade.

“This is not about $7.25, it’s about the nearly 1 million Pennsylvanians who will get a raise at $12 an hour,” said Wolf said in a statement. “Too many essential workers are earning poverty wages while putting themselves at risk to keep our society running. They keep food on shelves, move crucial supplies, take care of our children, and support people with disabilities. And thousands of them earn poverty wages. These hardworking people deserve better. They deserve a living wage.”

Under the governor’s proposal, minimum wage in Pennsylvania would jump to $12 an hour on July 1. After that point, 50 cent annual increases would kick in until the state reaches $15 in 2027.

The plan would spread the impact on employers. Many jurisdictions have been more aggressive when crafting minimum wage laws, often going up by $1 each year, as was the case in Florida’s voter-approved rate increase.

Wolf has called for minimum wage increases for several years.

The Pennsylvania Chamber of Business and Industry has come out against the idea, noting a study from the state Department of Labor and Industry showing that minimum wage earners in the state represent 2.4 percent of hourly employees and 1.3 percent of all workers.

“For years, advocates have politicized the minimum wage issue, touting it as the panacea to helping low-income Pennsylvania families out of poverty,” Pennsylvania Chamber of Business and Industry President and CEO Gene Barr said in a statement. “However, the state Department of Labor and Industry’s 2021 Minimum Wage Report reveals important data that demonstrates why focusing on this policy is misguided. According to the report, 84 percent of minimum wage earners have no children; 34 percent have family incomes of $75,000, with 22 percent over $100,000; and nearly 70 percent are younger than 25 years old.”

While the Biden administration’s push to increase the federal minimum wage fell short as part of the COVID-19 stimulus package, there continues to be a growing sentiment among lawmakers across the country that rates should be raised.

Of course, despite inaction at the federal level since 2009, smaller jurisdictions have continued to set their own rates. At the state level, these increases are often clustered geographically. With many of Pennsylvania’s neighbors having rates well above the $7.25 floor, it could be a matter of when, not if, the state increases its own minimum wage.

But the Pennsylvania governor has urged legislators to increase minimum wage several times in the past. It remains to be seen what will happen with minimum wage in the Keystone State this time around.

How Has Biden Impacted Employment Law Already?
Scroll to top