Marijuana Legal in 4 More States: For Employers, Now What? 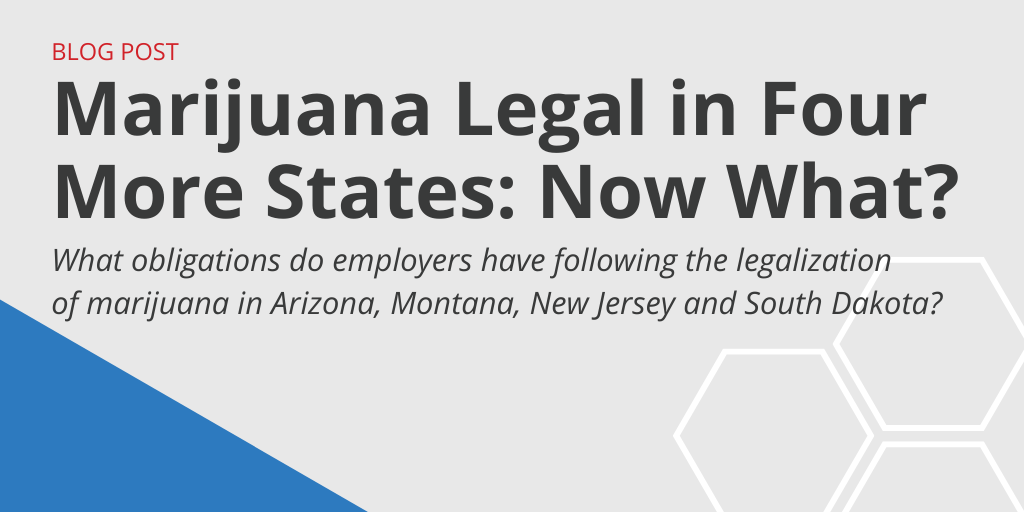 The expansion of legalized marijuana across the U.S. has created additional challenges for employers.

All four 2020 ballot initiatives to legalize marijuana passed in Arizona, Montana, New Jersey and South Dakota. What does that mean for employers?

The expansion of legalized marijuana across the U.S. has created additional challenges for employers. Among the items compliance and HR teams must consider:

With four new states added to the growing number that allow recreational marijuana, employers another set of regulations to monitor. Below, we will examine what guidance state officials have offered in the wake of the successful ballot measures.

As always, it’s worth noting that marijuana remains illegal under federal law.

Lawmakers in Arizona have until early April to establish how sales will work in the state, which began accepting license applications for dispensaries in January.

Most notably for employers, the Smart and Safe Arizona Act allows companies to drug test employees and maintain a drug-free workplace. (Some states, such as Illinois and Nevada, have more employee-friendly rules associated with their legalized marijuana laws.)

Meanwhile, Arizona’s legal recreational marijuana law reduced criminal classifications for use and possession, which could impact hiring practices for employers.

In Montana, voters approved both legalized marijuana ballot proposals. It is now legal for adults 21 and older to use and possess small amounts of weed, but sales won’t begin until 2022.

Like Arizona, employers in Montana can maintain a drug-free workplace and take adverse action against employees who use marijuana, including off-site. The same applies to Montana’s medical marijuana law.

State officials are still mulling additional rules and regulations, which will likely be released in October.

New Jersey’s law provides protections for employees who use marijuana off-site and prevents employers from taking adverse actions for use — during employment as well as the pre-employment hiring process.

For drug testing, employers may do so if a worker exhibits signs of being high at work or after an accident at work. Employers can maintain a drug-free workplace under the law. Still, it’s uncertain how companies may be able to respond to a positive test.

For South Dakotans, possession and use of recreational (and medicinal) marijuana begins July 1.

Here, the law says employers can maintain a drug-free workplace and refuse to hire someone based on a positive test from a pre-employment drug screening. Employers are not prevented from restricting use by workers.

However, employers must make accommodations for users of medicinal marijuana, so long as it does not conflict with federal laws and regulations.

Lastly, there has been a legal challenge to the law in South Dakota.

The tide of expanded recreational marijuana use continues to grow across the U.S.

More states in 2021 have already seen marijuana bills introduced, and with a new administration in the White House, further changes could lie ahead.

At the least, employers will want to consult with legal counsel, review employee handbooks and procedures, and review other states with marijuana laws to remain compliant.