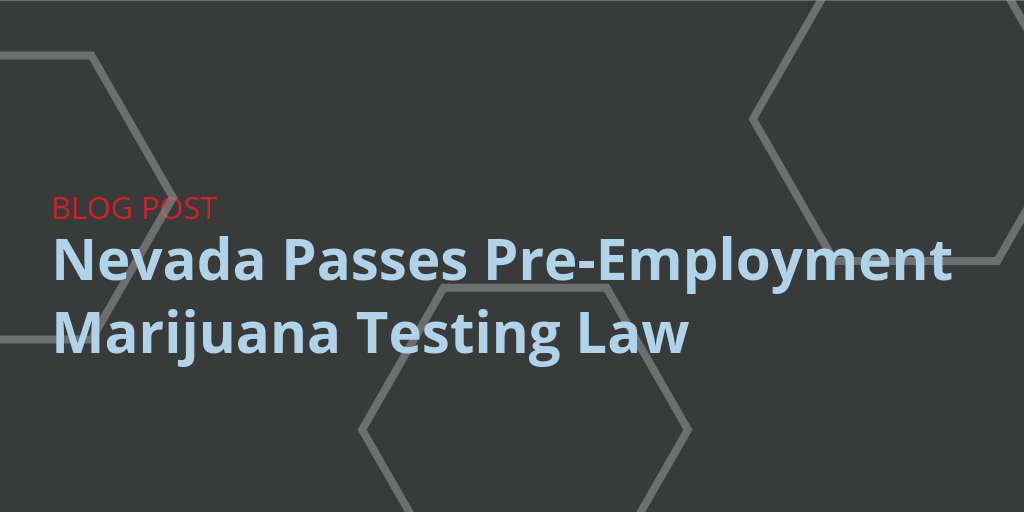 Starting in 2020, it will be unlawful for employers in Nevada to refuse to hire someone based on the presence of marijuana in pre-employment drug screenings.

The state in June 2019 became the first in the nation to pass such a law. (Maine has a law that prevents companies from discriminating against people who have used pot, but the legislation does not address testing.)

There are exceptions to the new Nevada law. It does not apply to:

“As our legal cannabis industry continues to flourish, it’s important to ensure that the door of economic opportunity remains open for all Nevadans,” Gov. Steve Sisolak said, according to CNN. “That’s why I was proud to sign AB132 into law, which contains common-sense exceptions for public safety and transportation professionals.”

The Nevada bill also differs from the one New York City passed in April. Under the New York City measure, it is unclear what happens when employees test positive after they are hired. But the Nevada law goes a small step further:

The Nevada law banning employers from not hiring someone based on the presence of cannabis in pre-employment drug tests goes into effect Jan. 1, 2020. It is part of a spate of employment laws the state has recently enacted, including a change to its minimum wage.

Marijuana and the Workplace

With low unemployment levels across the country — and the expansion of legalized marijuana at the state level — some businesses are shifting attitudes toward marijuana use when it comes to hiring.

She added: “When New York City passes a law, that just gets employers talking.”

“We don’t do drug screenings for two main reasons,” he said. “First, the jobs within our organization do not require a pre-employment drug test and second we trust that our team members will make the appropriate decisions in order to be a productive member of our teams while adhering to local laws.”

As marijuana usage becomes more permissible nationwide, workers in general are curious about how the laws apply to their employment. A recent GovDocs survey of HR professionals found that questions about marijuana were among the most common they receive.