Legalized Recreational Marijuana on the Ballot: What Employers Need to Know 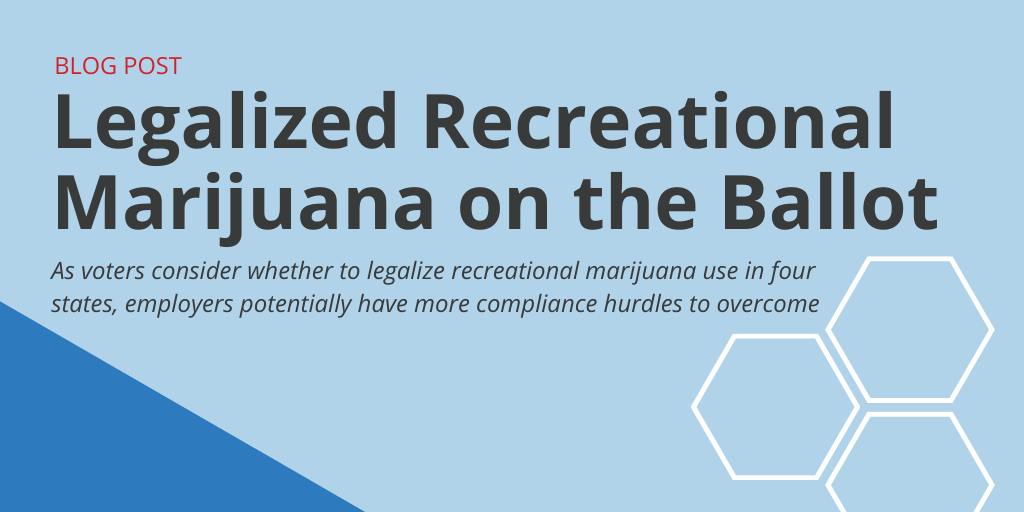 As voters consider whether to legalize recreational marijuana use, employers potentially have more compliance hurdles to overcome.

As the eyes of the nation focus on the presidential race Nov. 3, employers should also note that legalized recreational marijuana is on the ballot in four states.

The growth in legalized weed has created extra hurdles for many businesses, with new employment laws impacting the interactions between employers and employees who use the drug.

Take Illinois, for instance. The state clarified its marijuana law in several ways:

Meanwhile, in Nevada, it is unlawful for employers to refuse to hire someone based on the presence of marijuana in pre-employment drug screenings. (It does not apply to certain professions, however.)

The four states where voters will consider legalized marijuana ballot measures include:

Below, we’ll give a rundown of what passage might mean for employers in the states considering legal recreational use of marijuana. However, compliance teams should also stay alert for potential guidance that may be issued at a later date.

Related: What Employers Need to Know About Legal Marijuana in Canada

In Arizona, Proposition 207 would make it legal for people 21 or older to grow, buy or possess small amounts of marijuana.

Notably for employers, the Smart and Safe Arizona Act, if passed, would allow companies to drug test employees and maintain a drug-free workplace.

Essentially, businesses that wish to forbid its use among employees will be able to do so. Still, it may be worth a review of company policies should marijuana become in Arizona.

The first, I-190, would allow anyone 18 or older to use weed, and would also allow those with convictions to request an appeal of their sentence.

For employers, I-190 would not prohibit employers from disciplining employees found in violation of workplace polices and allows companies to decline to hire someone because of marijuana.

Under a constitutional amendment, New Jersey’s marijuana measure would make it legal for adults 21 and older to grow, buy and posses marijuana.

While a regulatory commission would be formed if the ballot initiative passes, and workplace use would be prohibited, the additional language that would be added to New Jersey’s constitution is silent on any employee protections.

It is worth noting that medical marijuana is already legal in New Jersey, but the law does not require employers to violate federal law or the Drug-Free Workplace Act.

Finally, South Dakota has both recreational and medicinal on the ballot.

The first, Constitutional Amendment A, would legalize recreational use and require the state legislature to pass laws providing for the use of medical marijuana by April 1, 2022. Only adults 21 or older would be able to use it.

The second would set up a medical marijuana program.

Amendment A would allow employers to not hire someone because of the presence of marijuana in a pre-employment drug screening. And it would not force employers to change current practices restricting the use of weed.

From New York to California, legalized marijuana often means more than the public’s ability to light up a joint.

Employers should review workplace policies, especially regarding hiring, to determine whether revisions are needed. Again, further guidance could be issued should the above ballot questions pass, which could prompt a new wave of compliance concerns.