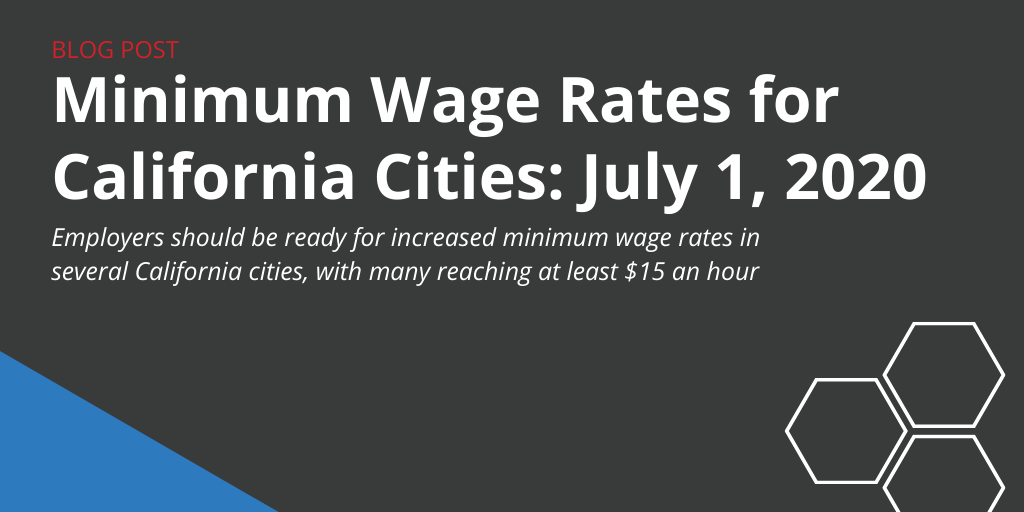 Employers should be ready for increased minimum wage rates in several California cities, with many reaching at least $15 an hour.

In general, California is one of the most employee-friendly states in the U.S. That is reflected in the minimum wage rates in its cities — many are at or above $15 an hour.

For a list of minimum wage rates for California cities that updated at the start of 2020, check out our previous Employment Law News blog post.

Employers with locations in California should also note that two cities have delayed planned July 1, 2020, minimum wage increases due to economic concerns over the coronavirus. They are:

The following list includes rates for large employers. Remember, some cities have separate rates tied to business size, the type of industry, whether the company is a nonprofit, or other factors. Most California cities seeing updates July 1, 2020, do not have a separate rate for employees who regularly receive tips. Employers should check local ordinances to ensure they are paying the correct rate based on their business category.

Cities in California pay some of the highest minimum wage rates in the U.S. The federal minimum wage of $7.25 has been unchanged for more than a decade, and cities in recent years have stepped in to set new rates.

Also, at this point many cities’ new rates are tied to the Consumer Price Index, which makes compliance with minimum wage updates more difficult to plan for.

To learn how you can ease the challenges of tracking minimum wage rates, join us for a demo of GovDocs Minimum Wage at 11 a.m. CDT Wednesday, July 8.

More Stories From Employment Law News
Which States Are Increasing Their Minimum Wage on July 1, 2020?