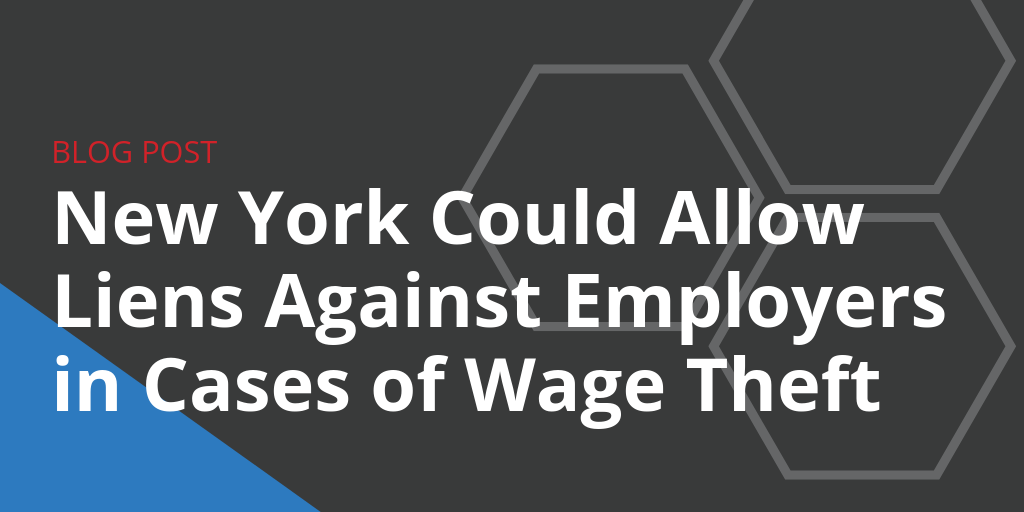 Notably, the act would give victims of wage theft priority in bankruptcy proceedings and an employee would not have to prove wage theft occurred in order to file the lien.

New York State appears poised to further protect employees who are victims of wage theft. A bill passed in both chambers this summer would allow workers to place a lien on an employer’s assets.

If signed by Gov. Andrew Cuomo, the bill would amend existing state laws and give employees the opportunity to freeze a company’s assets based on a wage theft allegation.

Notably, the act would give alleged victims of wage theft priority in bankruptcy proceedings and an employee would not have to prove wage theft occurred in order to file the lien.

Should the measure be enacted, New York would join 10 other states that have lien remedies available to wage theft victims. (New York does have a lien law on the books, but it only applies to specific construction workers and dates to the early 1900s.)

Under the legislation, liens could be levied against:

The legislation is a response to situations in which an employer transfers his or her assets to a friend or family member when facing a wage theft claim. The measure is called the Securing Wages Earned Against Theft (SWEAT) Bill.

Types of wage theft claims could include:

The bill stipulates that workers going through wage theft proceedings would be able to freeze an employer’s real or personal property, up to the value of the suspected unpaid wages. Claims must be filed within three years of the “end of the employment giving rise to the wage claim,” reads a portion of the the legislation. Liens would last for a year, barring an extension.

Meanwhile, the bill would also give employees access to a business’ books and records during wage theft proceedings.

Should the governor sign the bill, it would go into effect 30 days later.

While the lien law has yet to take effect, the New York governor continues to combat wage theft. In mid-August his office announced that about $6 million in stolen wages would be returned to approximately 500 workers following a wage theft investigation. It was the largest wage recovery in the history of the New York Department of Labor.

“We have absolutely zero tolerance for any business that exploits workers and robs employees of hard-earned wages — period,” Cuomo said.

It follows a trend of states looking to protect employees from wage theft.

Minnesota this spring enacted one of the nation’s strongest wage theft laws, with prison time and fines up to $100,000 possible for violators. And Colorado this year made wage theft a felony if the amount is more than $2,000.

It’s an issue nationwide. In the 10 most populous states, underpayment of wages is more than $8 billion annually, according to a 2017 Economic Policy Institute report.  At the same time, 17 percent of minimum wage workers — 2.4 million in those 10 states — report being paid less than applicable minimum wage, the study says.

Ultimately, employers should ensure their payroll practices are in line with state law to prevent any potential litigation.