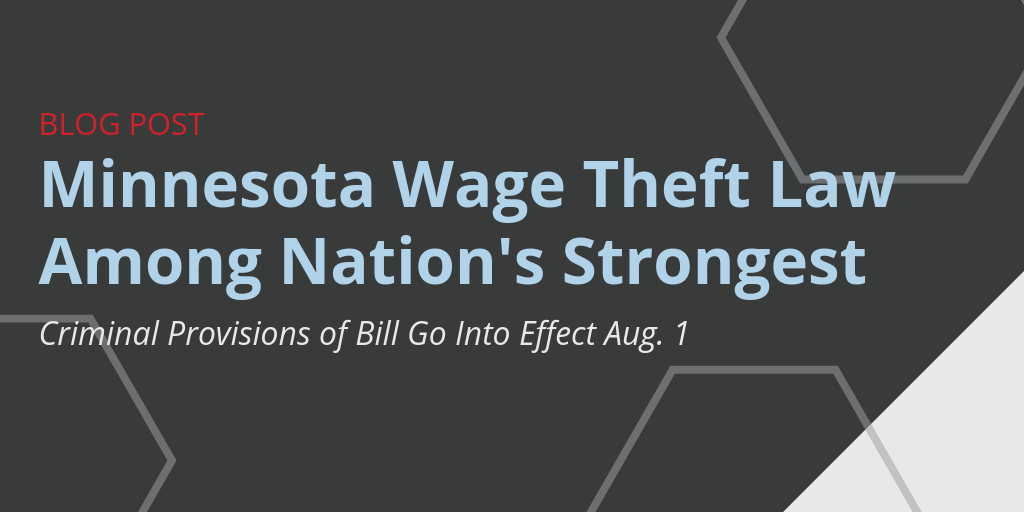 The Land of 10,000 Lakes is giving employers hundreds of thousands of reasons not to commit wage theft. Criminal provisions of Minnesota’s new wage theft law — including prison time and fines up to $100,000 — go into effect Aug. 1.

Lawmakers this May passed the measure as part of a larger Omnibus Jobs and Economic Development bill. (Certain provisions in the wage theft portion of the bill went into effect July 1.)

There are serious penalties for employers who violate Minnesota’s new law. If the wage theft exceeds $35,000, the maximum penalty is $100,000 and/or up to 20 years in prison.

There are many forms of wage theft, including: overtime and “off-the-clock” violations, minimum wage violations, not paying workers the difference between their tips and the legal minimum wage, misclassifying employees and more.

While not unique to Minnesota, the expanded recordkeeping requirements under the new wage theft law are stringent for employers. When workers start their employment, the employer must provide, among other information:

The impacts of the legislation are already being felt. Just days after portions of the bill went into effect, construction workers in Rochester, Minn., alleged a firm withheld wages on a $40 million city project in 2018.

Find more detailed information on the Minnesota Department of Labor and Industry website.

As Minnesota gives state departments more power to investigate and punish wage theft, there have been a growing list of laws nationwide aimed at helping workers recoup unpaid earnings.

Wage theft may not garner the headlines of minimum wage, for example, but it is more common than one might imagine. According to a 2017 Economic Policy Institute report, in the 10 most populous states, underpayment of wages is more than $8 billion annually. Also, 17 percent of minimum wage workers, 2.4 million in those 10 states, report being paid less than applicable minimum wage, according to the study.

Employment laws continue to grow and change across the country. Wage theft protections are, of course, among them.

At least 10 states now allow workers to put a lien on an employer’s property in connecting with a wage claim, with New York closing in on its own bill. Meanwhile, Colorado this year made wage theft a felony if the amount is more than $2,000.

Combating wage theft (intentional or otherwise) is just part of the compliance matrix for HR and payroll teams. And Minnesota’s new law is good example of the complexities — and seriousness — of navigating this ever-changing landscape.