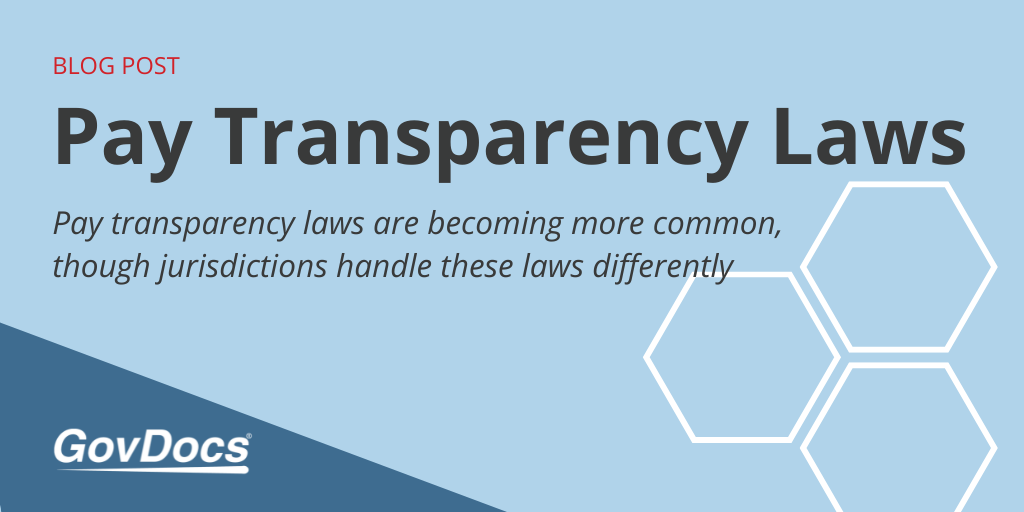 Of course, as with all aspects of employment law, each jurisdiction handles pay transparency laws differently.

As of this writing, only a few jurisdictions in the U.S. have some form of a pay transparency law. But more could be on the horizon.

Of course, as with all aspects of employment law, each jurisdiction handles these requirements differently.

Starting at a high level, several states have laws that require employers to disclose the pay range for a position if the applicant asks for it:

Even among these states, there is some variation in how they implement their pay transparency laws.

Connecticut’s law requires employers to provide salary range information to applicants by the time they extend an offer of compensation — even if the applicant did not request it.

Meanwhile, employees are entitled to salary range upon hire and when changing roles, in addition to upon request.

In Nevada, employers must disclose the salary range to applicants who have completed an interview for the position.

Also, salary range information must be given to employees for a promotion or transfer if the employee has applied, completed an interview or has been offered the position (and if requested).

Effective January 2023 in Rhode Island, employees will be entitled to salary range upon hire, when changing jobs and upon request.

In Washington (more information below), salary range information must be provided to employees changing roles if requested.

Some jurisdictions go further regarding pay transparency laws and require salary ranges to be listed in job postings.

It now goes into effect Nov. 1, 2022, rather than mid-May 2022. And city officials also made some tweaks to the ordinance.

At a high level, employers in November 2022 must include “good faith” estimates of salary ranges in job advertisements, as well as for promotions or transfers.

Additionally, New York provided some clarification regarding the law.

The law now applies only to jobs performed within New York City, including an employee’s home if they work remotely.

Regarding pay transparency, the city council changed the law to require salaries or hourly wages instead of “compensation.”

Employers also will not suffer penalties for an initial violation of the law as long as it is corrected within 30 days of receiving a complaint from the New York City Commission on Human Rights (NYCCHR). Subsequent violations, however, would not receive the same leeway.

The NYCCHR has provided a two-page fact sheet regarding the law, which outlines other information, including:

California can’t always be first when it comes to employment law.

Colorado was the first state to pass a pay transparency law regarding job postings.

It applies to Colorado employers with at least one employee, as well as out-of-state employers, which has become an issue for some companies. There has been pushback among some employers that have decided not to consider applicants in Colorado for remote jobs specifically because of the law.

In addition to the including pay ranges in job postings, Colorado employers must give formal notice of internal opportunities for promotion on the day the opening occurs to employees in the state.

Starting Jan. 1, 2023, many employers in Washington State must disclose the salary range, or wage scale, and a description of all benefits and other compensation in job posting.

It applies to employers with 15 or more workers. The pay transparency law amended Washington’s existing requirements that employers must disclose wage information to applicants only upon their request.

A “job posting” is defined as:

“Any solicitation intended to recruit job applicants for a specific available position, including recruitment done directly by an employer or indirectly through a third party, and includes any postings done electronically, or with a printed hard copy, that includes qualification for desired applicants.”

These laws preclude employers from relying on pay history to set compensation, part of the growing employment law sector related to the #MeToo movement. Employers can usually ask for pay expectations but not actual pay history.

States, or jurisdictions within them, that have salary history bans include:

The list above is for private employers There are several other jurisdictions that have similar laws for government employers.

There are several jurisdictions in the U.S. that have considered pay transparency laws of late, including:

And California has a draft bill that would mirror much of Colorado’s pay transparency law.

Plus, a competitive job market could spur companies to unilaterally opt to start including pay ranges with job postings, though there is some concern that it could create issues with existing employees who may not earn as much even though they hold the same position.

Still, employers with locations in the jurisdictions listed above should review their hiring practices to ensure they align with the law.