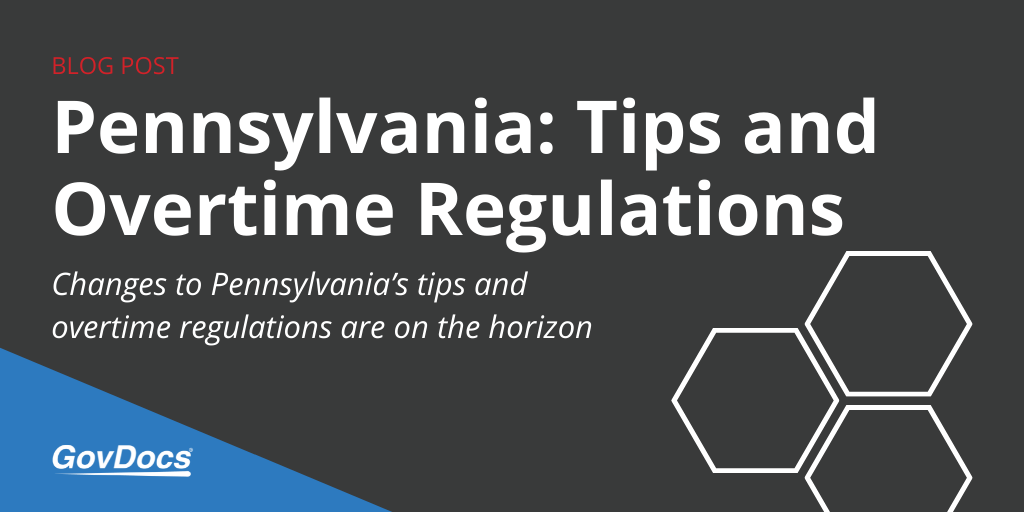 The updates to the Pennsylvania Minimum Wage Act have been submitted to the Office of Attorney General. Upon approval, the regulations will become effective 90 days after.

Changes to Pennsylvania’s tips and overtime regulations are coming.

Following a unanimous motion from a regulatory review commission, Pennsylvania is poised to update rules for tipped employees as well as how salaried employees with fluctuating schedules are paid for overtime.

The updates to the Pennsylvania Minimum Wage Act have been submitted to the Office of Attorney General. UPDATE: The changes are now in effect.

Gov. Tom Wolf has long pushed for an increase to the Pennsylvania’s minimum wage, which sits at the federal level of $7.25. Every state bordering Pennsylvania has its own, higher minimum wage rate.

“We are pleased with the commission’s step toward ensuring that all Pennsylvania workers are fairly paid for their labor,” Wolf said in a statement. “Our embarrassingly low minimum wage has widespread effects that go beyond the unfairly paid workers and their families. When people earn a decent wage, they can contribute to the economic health of their communities and the commonwealth. When they don’t earn enough to pay for bare necessities, they are forced to rely on public benefits.”

While not impacting the standard minimum wage rate in Pennsylvania, the new tips and overtime regulations have several items for employers to consider.

First, there is an update to the definition of “tipped employee.”

It’s worth noting that the tipped employee minimum wage in Pennsylvania is $2.83.

Another change relates to tip credits.

Pennsylvania will align with a recent federal regulatory update regarding the ability of employers to take a tip credit under certain conditions, including that the employee spends at least 80 percent of their time on duties that directly generate tips, also known as the 80/20 rule.

Also aligning with a recent federal regulatory update, the state will allow for tip pooling among employees but in most cases exclude managers, supervisors and business owners.

Lastly, the final-form regulation also updates the definition of “regular rate” for salaried employees whose overtime pay is determined by a fluctuating workweek, clarifying that for the purpose of calculating overtime the “regular rate” is based on a 40-hour work week.

The proposal is part of a larger employee-friendly agenda from Gov. Wolf that also includes paid sick leave and higher wages.

At the outset of 2022, he pushed for legislation that would gradually take Pennsylvania to a $15 minimum wage. But the bills did not gain any traction in the legislature.

Wolf has also supported the elimination of the $2.83 an hour minimum wage for tipped workers and establishing a single wage for all Pennsylvania workers.

Employers should review their policies, for tipped employees especially, to ensure they are prepared for the likely changes to Pennsylvania’s tips and overtime rules.