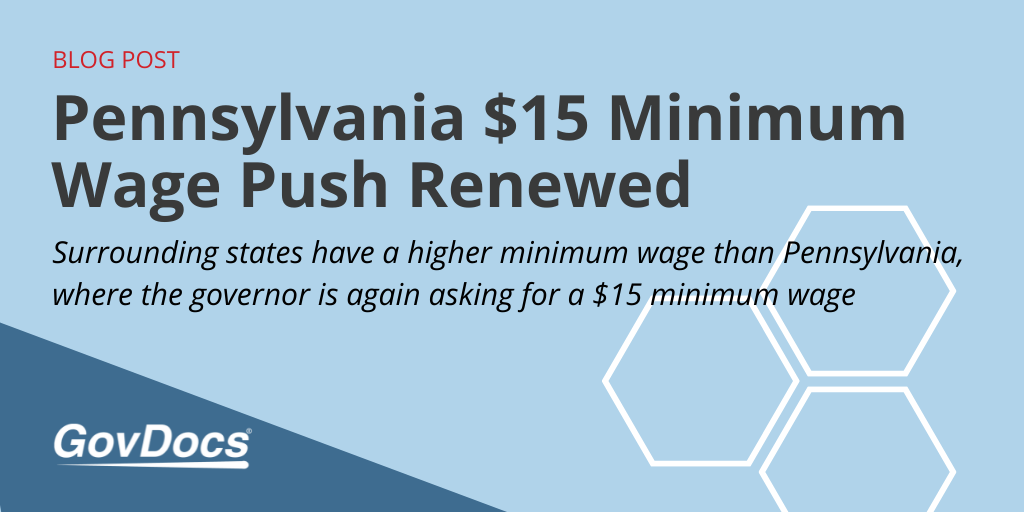 The governor of Pennsylvania has proposed a minimum wage increase each year he has been in office.

Pennsylvania $15 minimum wage? The governor is asking for it once again.

Gov. Tom Wolf in late January 2022 renewed his call for a minimum wage increase in Pennsylvania, which is currently at the federal level of $7.25. Many surrounding states have set their own minimum wage rates in recent years. UPDATE (August 2022): The state has updated its minimum wage regulations:

“The fact that Pennsylvania’s minimum wage hasn’t increased in 15 years is an embarrassment,” Wolf said in a statement. “It’s an insult to hardworking Pennsylvanians, and it means businesses and communities in Pennsylvania are getting left behind. Hardworking people can’t wait any longer. I call on Republican lawmakers in the General Assembly to step up and take action on behalf of workers, businesses, and our economy.”

Bills regarding a minimum wage increase in Pennsylvania have been introduced in both chambers:

The governor’s office estimates nearly 25 percent of Pennsylvania employees would receive a pay increase if minimum wage were $15.

As mentioned, many of the states around Pennsylvania have minimum wage rates well above the federal level, including:

Wolf has previously called on lawmakers to increase minimum wage in Pennsylvania, having proposed a minimum wage bump each year he has been in office. And while those efforts have thus far been unsuccessful, he did raise the minimum wage rate for state employees to $15, effective Jan. 31, 2022.

However, with Republicans in control of both houses of the Pennsylvania legislature, it will likely be an uphill climb for the minimum wage bill to become law.

Minimum wage continues to be a hot topic across the U.S.

At the start of 2022, more than 20 states increased minimum wage, along with over 30 combined counties and cities. Places like California are leading the way with raising the minimum wage at the local level, and so-called hero/hazard pay that was in place during the pandemic sparked renewed public discourse about low-wage workers.

Several jurisdictions have minimum wage bills under consideration, and ballot measures related to minimum wage will also be put to voters in 2022:

The situation creates plenty of challenges for employers, especially those with locations all around the country.

While the outcome of the Pennsylvania governor’s latest push for a $15 minimum wage remains to be seen, the continued increases in nearby states could create a climate more conducive to its passage.

One employer with more than 50 locations in Pennsylvania and the surrounding area was on hand at the governor’s press conference to tout the company’s own $15 minimum wage, and other employers have also moved forward by increasing the floor for its wages.

As always, employers should monitor new legislation like the push for a $15 minimum wage in Pennsylvania to ensure compliance.