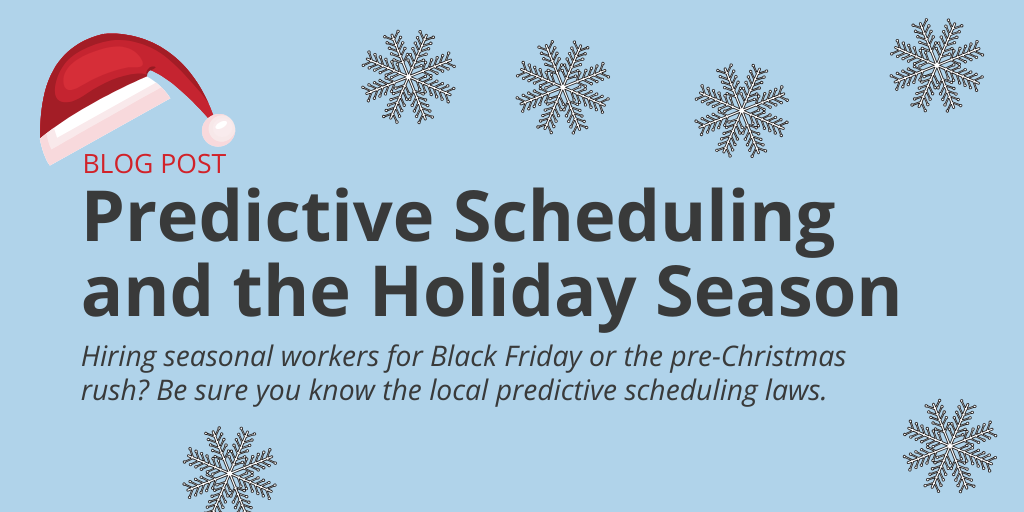 With predictive scheduling, it’s not simply posting your Black Friday schedule in the breakroom.

Halloween is in the rearview mirror, and the holiday season is nearly upon us. That means many businesses — especially in retail, food and hospitality — will take on extra employees to deal with the rush of shoppers. That also means employers must be aware of local predictive scheduling laws.

Predictive Scheduling on the Rise

Oregon was the first state to pass a predictive scheduling law in 2017. Since then, other jurisdictions across the country have implemented their own rules.

Fundamentally, predictive scheduling is aimed at giving employees more work-life balance by requiring companies to post schedules ahead of time. But it can involve more than that for employers, including:

With predictive scheduling, it’s not simply posting your Black Friday schedule in the breakroom this week.

Most predictive scheduling laws apply to the retail, food and hospitality industries. The specifics of the laws can vary by business size, notice requirements, recordkeeping, treatment of part- and full-time workers, etc.

Also, these laws may go by other names, “fair workweek,” for example, and generally require a posting, as well.

Several states have considered a predictive scheduling law, but only Oregon has a statewide rule in place. (Vermont and New Hampshire have more limited scheduling-related laws.)

However, several cities have enacted predictive scheduling laws, including:

While similar, each ordinance has its own rules for scheduling. Be sure to research any jurisdiction where you have employees — not only for predictive scheduling, but other laws like minimum wage, wage theft, paid leave, etc.

Also note that local municipalities are prohibited from passing predictive scheduling laws in:

Employers and the Holiday Season

The holiday season is meant to be a festive time. And many companies in the retail, food and hospitality industries rely on the annual rush of business. Target, for example, says it plans to hire more than 130,000 seasonal workers this year.

Whether it’s Thanksgiving weekend — with people back in town, Black Friday and Small Business Saturday — or the big shopping leadup to Christmas, you might be hiring seasonal employees this year.

As you do, be sure to consult the employment laws in your jurisdiction to remain compliant.