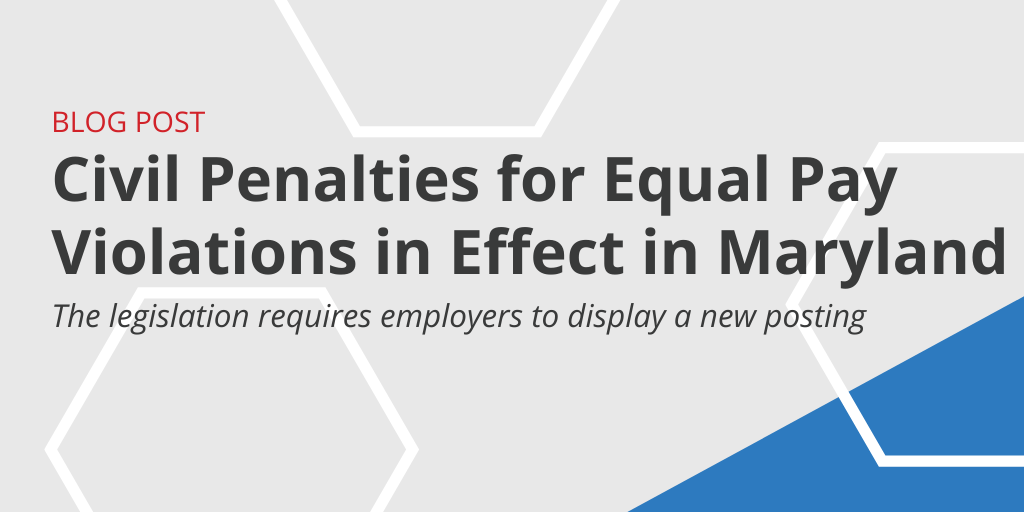 Civil penalties can now be levied against employers in Maryland who violate the state’s equal pay law.

The legislation, which went into effect Oct. 1, requires all employers in Maryland to display a new posting.

Firstly, employers in Maryland should be aware of the requirements of the equal pay law. Under the measure, businesses cannot:

Compensatory damages were already in place under the equal pay law, including forcing employers found in violation to repay the difference in wages, attorney’s fees and liquidated damages.

Meanwhile, the Equal Pay Remedies and Enforcement Act gives a state regulatory body the ability to asses civil penalties on employers who have violated the equal pay act twice or more within a three-year period. Penalties may include:

While the new law outlines how employers must comply with state investigations, the bill also includes some responsibilities for employees related to bringing forth malicious or “bad faith” complaints.

The median salary for women in Maryland is about 78 percent that of men. Such inequalities, along with the rise of the #MeToo movement, has helped spur equal pay legislation across the country.

Today, 42 states have equal pay laws on the books. And many states are opting to enhance protections under such legislation. They can be related to employees discussing salary information, screening applicants based on salary history and more.

It’s up to employers to remain cognizant of this changing landscape and remain compliant with laws at the state, county and city levels.