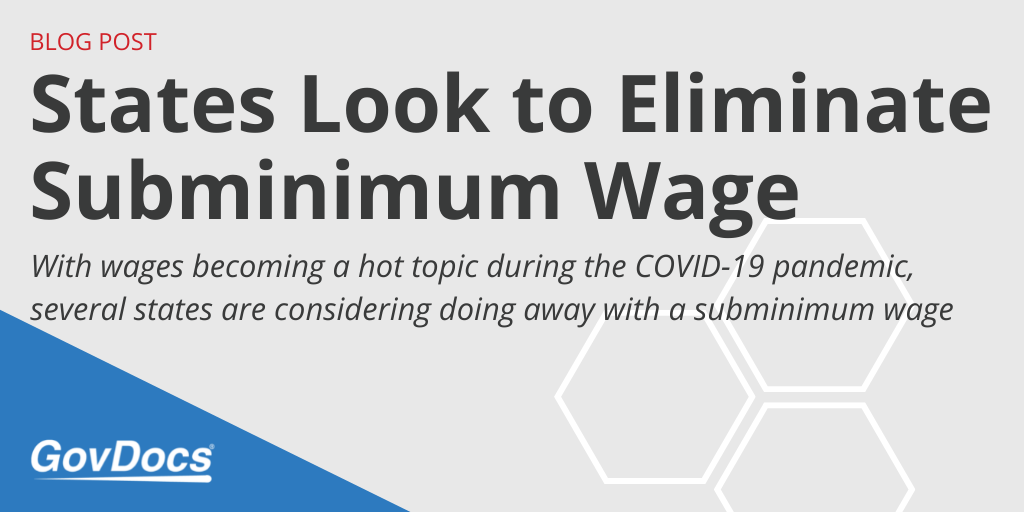 A sometimes-overlooked aspect of wages is the subminimum wage, which allows employers to pay less than the standard minimum wage to workers in certain categories, often students or the mentally and physically disabled.

Wages have become a hot topic during the pandemic. From the lack of people filing for jobs to the potential for a new federal minimum wage, there has been no shortage of developments on the matter.

But a sometimes-overlooked aspect of wages is the subminimum wage, which allows employers to pay less than the standard minimum wage to workers in certain categories, often students or the mentally and physically disabled.

Several states over the past few months have seen bills introduced to eliminate the subminimum wage.

Below, we outline some of the states that have had legislation proposed recently and the potential impacts to employers.

It should come as no surprise to employers that California is among the states looking to do away with a subminimum wage.

Existing California law allows a special license allowing employees to be paid less than the minimum wage a year at a time. The proposed amendment would permit a license to only be renewed for existing license holders who meet certain benchmarks, and bar the practice entirely starting Jan. 1, 2025.

A phase-out plan would be put in place before 2023.

In Colorado, the proposed legislation also calls for phasing out subminimum wage.

The bill would ban employers that do not have a special certificate from the U.S. Department of Labor authorizing the employer to pay less than the minimum wage to employees whose earning capacity is impaired by age, physical or mental disability, or injury.

It would also require employers with those certificates to submit a transition plan to the Colorado Department of Labor and Employment detailing plans to phase out subminimum wage employment by July 1, 2025.

On and after July 1, 2025, an employer would be prohibited from paying an employee with a disability less than minimum wage regardless of whether the employer was issued a special certificate.

Delaware’s bill is specifically aimed at people with disabilities.

The Jamie Wolfe Employment Act seeks to recognize Jamie Wolfe, “who worked tirelessly on behalf of people with disabilities for equal rights and equal access to education, housing, competitive and integrated employment, transportation and community-based services.”

Under the legislation, authorization to pay workers with disabilities less than the minimum wage would be phased out by July 1, 2023.

Hawaii’s bill passed the House and Senate and was sent to the governor late last month. It essentially eliminates subminimum wage for individuals with disabilities.

In Minnesota, the bill to remove the subminimum wage is also focused on those with disabilities.

If passed, the bill would create a task force on eliminating the subminimum wage to develop and implement a plan to phase it out. A report would be issued with recommendations by Jan. 14, 2023.

The goal would be to remove subminimum wage in Minnesota by Aug. 1, 2025.

North Carolina’s bill is tied to an increase in the state’s minimum wage, which would increase to $15 by 2023, as well as phasing out the tipped employee wage through 2025.

If passed, the bill would repeal the state’s subminimum wage for specified workers.

In New York, the proposed subminimum wage bill would:

Washington’s bill to eliminate the subminimum wage for people with disabilities was signed by the governor on April 16.

No special subminimum wage certificates will be issued after July 31, 2023.

For large companies that employ a wide variety of people, subminimum wage is likely something compliance teams closely monitor.

As with many aspects of employment law during the pandemic, increased scrutiny has been placed on compliance. Employers should keep tabs on the latest legislation to remain aligned with current laws, as well as planning for the future.