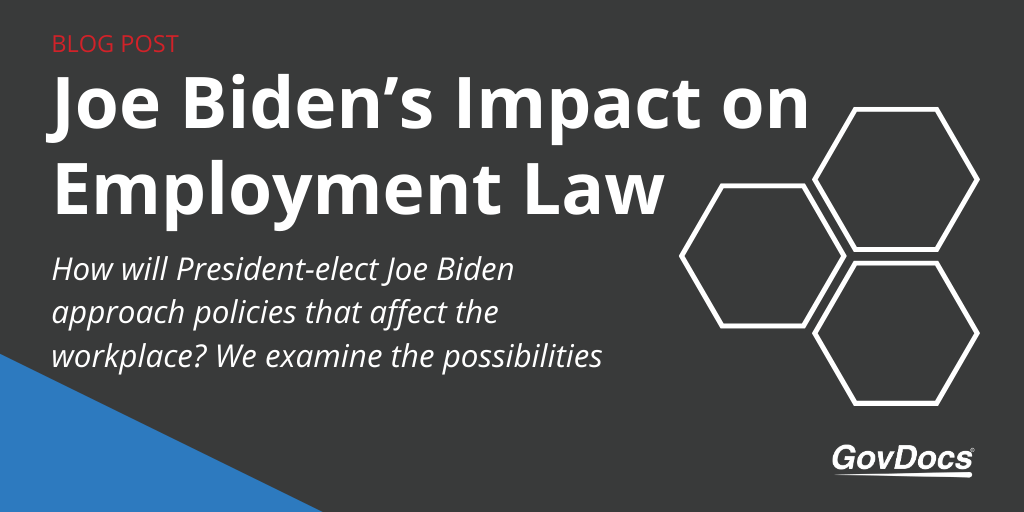 How will President-elect Joe Biden approach policies that affect the workplace? We examine the possibilities.

While the courts continue to sort out lawsuits over the election results, it still makes sense to look ahead to President-elect Joe Biden’s impact on employment law.

The Democrat has made his voice heard on several issues that should interest employers. From minimum wage to labor unions and more, we can examine how the executive branch may approach policies that affect the workplace in coming years.

Below, we will focus on a few major aspects of employment law and where Biden may focus his policymaking efforts.

Of the employment laws Biden could potentially influence, one issue he has been clearest on is minimum wage.

He has come out in support of a $15 minimum wage nationwide.

What does building back better mean for you?

– Millions of new, good-paying jobs
– A $15 federal minimum wage
– Stronger benefits and fair workplaces
– An economy that works for everyone—not just the wealthy
– The choice to join a union

That’s the future we can build together.

For tipped employees, Biden has supported eliminating tipped wages and having one rate across the board.

The federal minimum wage of $7.25 has been static for more than a decade, the longest stretch without an increase in the history of the U.S.

Still, states, counties and cities have set their own rates in recent years. Though the $15 benchmark isn’t overly common today, many have scheduled increases to eventually reach that amount. (In places like California, however, a minimum wage over $15 is becoming more common among its cities.)

Lastly, on the wage front, Biden has also suggested indexing the minimum wage to the median hourly wage, as well.

The political appetite for such a large increase, nearly doubling the federal minimum wage rate, is difficult to gauge. However, a Pew Research Center study conducted in the spring of 2019 found that 67 percent of respondents would support an increase to $15. Plus, some employers have opted to offer increase rates to or near $15 in an effort to attract employees.

Taking into account the current state of the economy and the ongoing pandemic, it will be interesting to see where federal lawmakers stand should a federal $15 minimum wage come to a vote.

At a high level, the notion of federal paid leave has been gaining a foothold in Washington, D.C.

The Families First Coronavirus Response Act, as well as paid parental leave for federal employees, may have opened the door for further paid leave legislation.

As for Biden’s take on a federal paid leave law, his plan calls for 12 weeks of paid leave for all employees for their own or a family member’s serious health condition.

This high-level snapshot of a federal paid leave program leaves plenty of questions, many of which large employers are navigating as they try to sort out the varying paid leave laws across the country. For instance:

However, in looking at Biden’s past political history, we do see support for the FAMILY Act, a measure that would be funded through payroll taxes and allow employees to take time for:

Biden was also a strong supporter of the Family and Medical Leave act of 1993, as well as a push as vice president to require federal contractors to offer paid sick leave for workers.

Often cited regarding Biden’s stance on paid leave is his experience with his son, who died of brain cancer in 2016.

Among the initiatives Biden has outlined when it comes to worker protections is more aggressively going after employers found in violation of employment laws. Specifically, Biden cites:

Much of Biden’s platform on workplace policies centers on unions and collective bargaining.

Offering an overview of his plan to encourage labor unions, Biden says he will:

At a legislative level, Biden supports the provisions of the Protecting the Right to Organize Act (PRO Act), which would expand the definition of joint employer and make it tougher to classify workers as independent contractors.

It’s clear the agenda coming out of the Oval Office would be more employee-friendly under a Biden administration.

But with the U.S. Senate potentially remaining in Republican control — and we’ll know more after a January 2021 runoff in Georgia — it could be difficult for some of these measures to eventually become law.

Also, there are other ancillary concerns employers will want to keep an eye on as Biden prepares to take office. For example, federal climate change initiatives could place extra regulatory burdens on some employers, while crediting others who move toward green policies. And his response to the COVID-19 pandemic, while not likely to take the form of permanent measures, will also have an impact on how employers operate.

While smaller jurisdictions show no signs of slowing when it comes to minimum wage, paid leave, worker protection laws and more, employers will likely see more employment law activity at the federal level under Biden versus President Trump.