What is the FLSA? 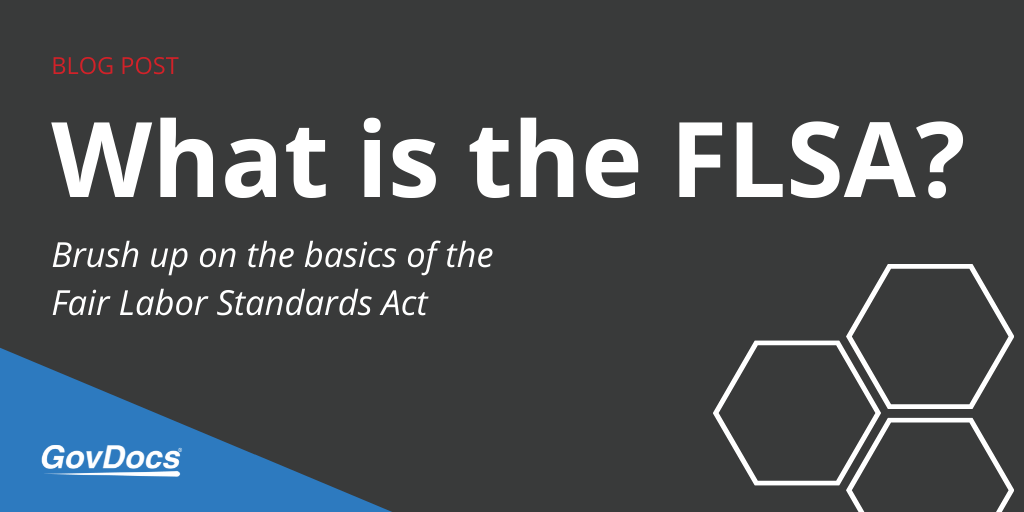 While more complex and employee-friendly legislation has been passed at the state and local levels in recent years, the FLSA remains the bare minimum employers must follow.

What is the FLSA?

The Fair Labor Standards Act (FLSA) is the backbone of federal payment laws, covering a multitude of requirements for employers. While state and local officials in recent years have passed laws that go beyond the scope of the FLSA, it remains an important piece of the employment law compliance puzzle.

At a high level, the FLSA covers laws for employees that include:

The information below provides background and some of the basics HR and compliance teams should know regarding the FLSA. While some might find it more of a refresher, those who are new to roles where the law applies may benefit from a look at exactly what the FLSA does.

Below are core elements of the FLSA.

While there has been a flurry of minimum wage laws enacted in recent years at the state, county and city levels, under the FLSA covered, nonexempt workers are entitled to a minimum wage of $7.25 per hour.

That figure was established July 24, 2009. It’s the longest stretch without a federal minimum wage increase in the nation’s history.

Meanwhile, nonexempt employees must be paid overtime one and a half times their regular rate of pay after 40 hours of work in a workweek.

On the other hand, the FLSA does not require:

Lastly, the FLSA does not limit the number of hours in a day or days in a week an employee may be required or scheduled to work, including overtime hours, if the employee is at least 16 years old. The above matters are for agreement between the employer and the employees or their authorized representatives.

Essentially, all employees are covered by the FLSA.

However, a covered enterprise is “the related activities performed through unified operation or common control by any person or persons for a common business purpose” and:

Also, any enterprise that was covered by the FLSA on March 31, 1990, and that ceased to be covered because of the revised $500,000 test, continues to be subject to the overtime pay, child labor and recordkeeping provisions of the FLSA.

Still, employees of companies that are not covered enterprises under the FLSA may be subject to its minimum wage, overtime pay, recordkeeping and child labor provisions — if they are individually engaged in interstate commerce or in the production of goods for interstate commerce, or in any closely related process or occupation directly essential to such production.

While the federal minimum wage was covered above, there are other considerations for employers.

While companies can consider tips part of employees’ wages, they still must pay $2.13 an hour, which is the federal minimum for tipped employees, who must also be informed in advance that their employer is taking a top credit.

If an employee’s tips combined with their direct wages of at least $2.13 an hour do not equal the minimum hourly wage, the employer must make up the difference. And employees are entitled to keep all their tips unless they participate in tip pooling.

For younger workers, those under 20 years old, employers are allowed make minimum wage $4.25 during their first 90 consecutive calendar days of employment. However, employers are barred from displacing employees to hire workers at the youth minimum wage.

Of course, employers should always be aware of states, counties and cities with higher minimum wage rates.

Federal officials provide some examples of exemptions from both minimum wage and overtime pay:

Exemptions from overtime pay only:

Employers should check the exact terms and conditions for each. Detailed information is available from local WHD offices.

The FLSA requires employers to keep records on a multitude of items.

Records required for exempt employees are different from those for nonexempt workers.

A hot topic in employment law of late, equal pay also comes under the purview of the FLSA.

The law bans gender-based wage disparities between men and women employed in the same establishment who perform jobs that require equal skill, effort, and responsibility and which are performed under similar working conditions.

Finally, there’s enforcement of the FLSA. (And, yes, employers must display the related labor law poster.)

The WHD investigates claims of FLSA violations and officials can recover back wages. The statute of limitations is generally two years, and three years for willful violations of the FLSA.

Civil penalties can be assessed in certain situations, including child labor and willful violations.

Find more examples of penalties in our whitepaper, Wage Theft: What Employers Need to Know.

While more complex and employee-friendly legislation has been passed at the state and local levels in recent years, the FLSA remains the bare minimum employers must follow.