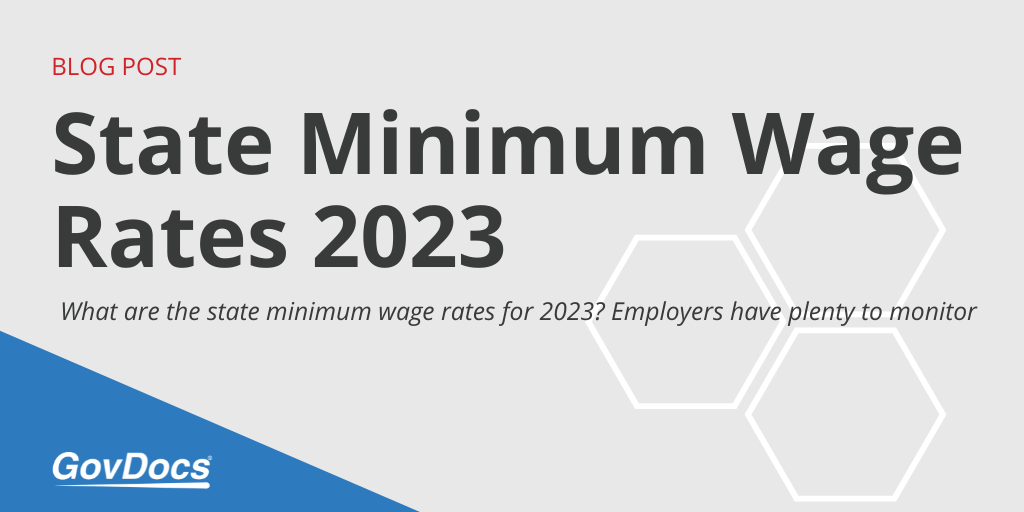 This massive list of 2023 state minimum wage rates? Don’t forget about all the county and city updates to monitor at the start of the year.

There are plenty to keep an eye on, especially at the outset of the year.

Most states with a rate above the federal level increase on Jan. 1 each year, with another handful going up on July 1.

From the odd situation in Michigan to Colorado’s recently announced update and the latest indexed numbers, here are the state minimum wage rates for 2023.

Before getting into the state minimum wage rates, it should be noted new rates often require employers to display an updated labor law poster (including minimum wage updates at the city and county level).

Alaska is one of several jurisdictions that have moved from scheduled rate increases to those based on the applicable Consumer Price Index (CPI).

Alaska does not have a separate rate for tipped employees.

Likewise, Arizona has also moved to indexed rate increases. Effective at the start of 2023, the state’s rates are:

As is almost always the case, California is complex when it comes to employment law.

The state had initially planned for two separate rates for 2023 — for large and small employers.

The accelerated increase is required through a provision in the law when inflation (under the U.S. CPI) exceeds 7 percent.

California does not have a separate minimum wage rate for tipped employees.

Also, it should also be noted California was the first state to reach the $15 minimum wage threshold. In case you’re curious: How Many States Have a $15 Minimum Wage?

Colorado is another somewhat unique case in that it allows for a comment period before the rate becomes official.

The state has approved its 2023 minimum wage rates (also increasing based on the CPI):

In Delaware, the state is still on an increase schedule, with its 2023 rate set at:

It, too, is another state moving toward a $15 minimum wage.

Illinois is also on an increase schedule to eventually bring the state’s rate to $15 an hour.

The minimum wage for tipped employees in Massachusetts in 2023 is $6.75.

Massachusetts does not have CPI increases planned after 2023.

Maryland has separate rates based on employer size. In 2023, the rates are:

Meanwhile, the 2023 tipped minimum wage in Maryland is $3.63, remaining the same. 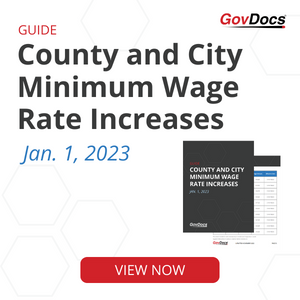 However, employers with locations there should keep an eye out for updates.

The state’s minimum wage law under the Improved Workforce Opportunity Wage Act (IWOWA) was originally introduced through a ballot initiative in 2018.

Before voters could weigh in on the measure, the Michigan Legislature voted to approve the ballot initiative. And then subsequently amended the requirements of the law.

As a result, the Michigan voters were prevented from deciding on the original ballot initiative or the amended version passed by the Michigan Legislature.

In February 2023, there could be additional movement regarding minimum wage in Michigan.

In Minnesota, where the state is under indexed increases, there are separate rates for large and small employers. Effective Jan. 1, 2023, the rates are:

If the combined amount of gross revenue is more than $500,000, employers must pay the large Minnesota employer minimum wage rate.

There is no separate rate for tipped employees in Minnesota.

Missouri wraps up its scheduled minimum wage increases in 2023, when the rates are:

Effective Jan. 1, 2024, the state will move to indexed increases.

Montana’s indexed increases are in effect, with 2023 minimum wage moving to:

The state does not have a separate rate for tipped employees.

In Nebraska, voters approved a minimum wage ballot measure in 2022 to that will gradually increase the rate to $15 per hour by 2026.

In New Jersey, the state has made an adjustment to its scheduled rate increases.

For tipped employees in 2023, New Jersey’s rates are:

While the rest of the states on this list update Jan. 1, New York is unique in that it increases rates Dec. 31 each year.

(Note that New York City and some counties have their own rates.)

Ohio is also on indexed rates, with 2023 minimum wage at:

On the path to a scheduled $15 minimum wage as well, Rhode Island’s rates for 2023 are:

Virginia is on scheduled increases, with 2023 rates at:

Indexed rates for Vermont begin Jan. 1, 2023, with the state’s minimum wage rates at:

Washington also has indexing in effect. Minimum wage in 2023 is:

Notably, it surpasses California for the highest state minimum wage rate in 2023.

Washington has no separate rate for tipped employees.

Not a state but worthy of inclusion here, Washington, D.C., has a new rate for tipped employees beginning Jan. 1, 2023:

(Note that D.C. updated its standard minimum wage in July 2022.)

The states that updated minimum wage rates July 1, 2022, include:

Meanwhile, state minimum wage rates with increases at other times of the year include:

And employers should always be watchful for new legislation on the minimum wage front.

Lastly, several states still adhere to the federal minimum wage, which hasn’t increased in more than a decade. They are:

It’s only the tip of the iceberg when it comes to minimum wage compliance. Dozens of counties and cities across the U.S. also have their own minimum wage rates, with many updating Jan. 1 or July 1 each year.

All this adds up to major challenges with minimum wage management for large employers.