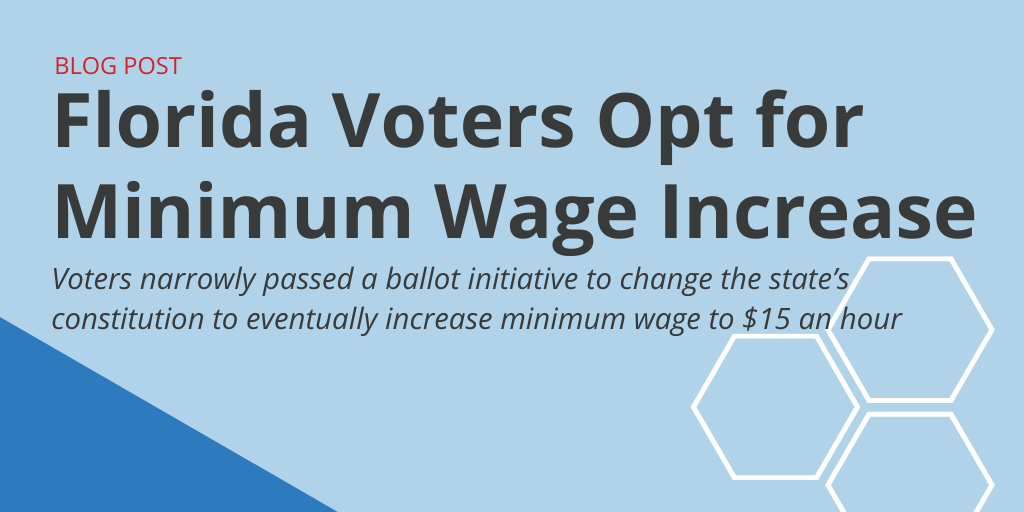 Florida voters narrowly passed a ballot initiative to change the state’s constitution to eventually increase minimum wage to $15 an hour.

Florida voters on Election Day 2020 passed a ballot initiative that will eventually increase the state’s minimum wage to $15 an hour.

The ballot measure ties minimum wage in Florida to the state’s constitution — it marked the first time that happened at the polls rather than through legislation. (Employers should also note that Colorado voters passed a paid family and medical leave law through the 2020 ballot.)

Each Sept. 30 in the coming years, minimum wage for non-tipped employees will be:

After 2026, rate increases in Florida will go up according to the Consumer Price Index.

The vote was close. With 60 percent in favor needed to pass, Amendment 2 garnered about 61 percent of the vote.

With the amendment’s passage, Florida is now the eighth state to pass a law to eventually bring its minimum to $15, part of the momentum of the nationwide Fight for $15. Proponents of the measure, citing an MIT study, said single adults must earn $12 to earn a living wage in Florida.

“Given the devastating impacts COVID-19 has already had on Florida’s economy, we are extremely worried about the job losses and business closures that will accompany this mandate,” Carol Dover, president and CEO of the Florida Restaurant and Lodging Association, said in a press release. “We are proud of our small business owners and employees from across the state who came together to fight this amendment. We have seen too many places across the country that have implemented this wage hike, only to see workers who were promised more money instead lose their jobs altogether. We are worried about our small businesses and the Floridians who will lose their jobs.”

Finally, the tip credit remains the same — $3.02. That means the tipped employee wage will always be the regular minimum wage less that amount.

Though the pandemic has led news reports regarding employment law in recent months, minimum wage remains a hot topic for lawmakers and employers alike.

Dozens of jurisdictions across the U.S. will see minimum wage increases at the start of 2021, many at the local level. About half of states still follow the federal rate of $7.25.

The federal rate hasn’t been increased in more than a decade, the longest stretch in the nation’s history, which has prompted smaller levels of government to create their own minimum wages. Indeed, two Maine cities put a minimum wage increase to voters in 2020.

To see Florida, which went to President Trump, pass a minimum wage ballot measure is interesting. Despite its political leanings, a progressive initiative about minimum wage going forward could be telling for future rate increases elsewhere.

Coupled with COVID-19 paid leave concerns, large employers have to be on their toes when it comes other aspects of employment law.

Florida employers should make plans now, and down the road, as the new minimum wage increases take effect.