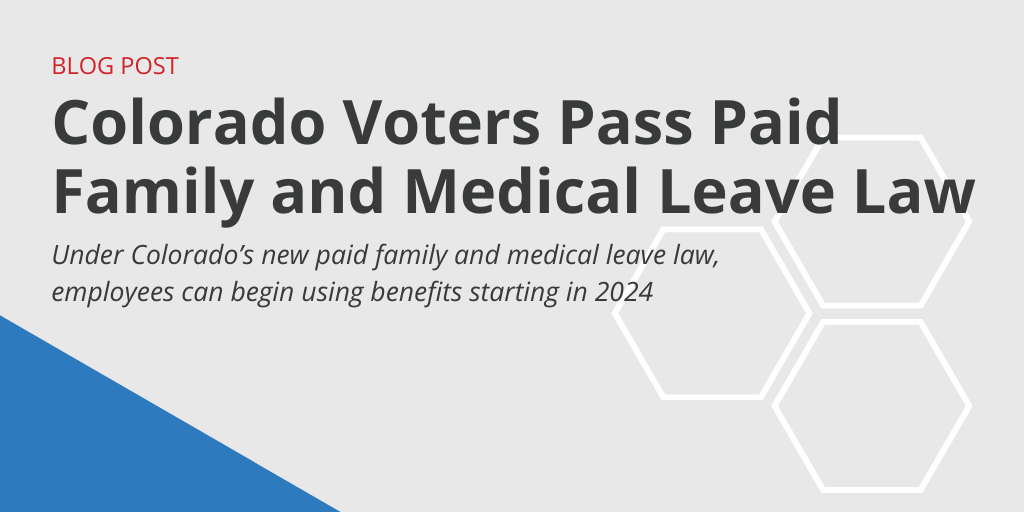 With about 57 percent of the vote in favor of Proposition 118, Colorado now joins eight other states and Washington, D.C., with a paid family and medical leave (PFML) law. The ballot initiative required a simple majority to pass.

It was the first time that voters have been asked to vote on a state paid leave law, similar to Florida and its minimum wage ballot initiative.

What Employers Need to Know About Paid Leave

Under Colorado’s PFML law, employers must provide 12 weeks of paid time off for the birth of a child and family emergencies, with an additional four weeks for pregnancy or childbirth complications. Other covered reasons for use include adoption, military service, and abuse and sexual assault.

It applies to nearly every employer in Colorado.

The law also requires job protection for employees and prohibits employer retaliation against workers who use PFML in Colorado. And local governments can opt out of the program.

Colorado’s new PFML law is broad regarding covered relations, which include:

Qualifying reasons for using PFLM in Colorado include:

Weekly benefits under the program are determined as follows:

Start collecting fees from employees and employers in 2023, with benefits starting in 2024.

Companies with nine or fewer workers would not have to pay the employer half of the premium.

While Colorado put the decision of paid family and medical leave into the hands of voters, other jurisdictions across the U.S. have passed measures through their respective legislatures.

While not all are in effect, employers should keep an eye for these and other PFLM laws in the future.