Denver to Move Ahead with Jan. 1, 2021, Minimum Wage Increase 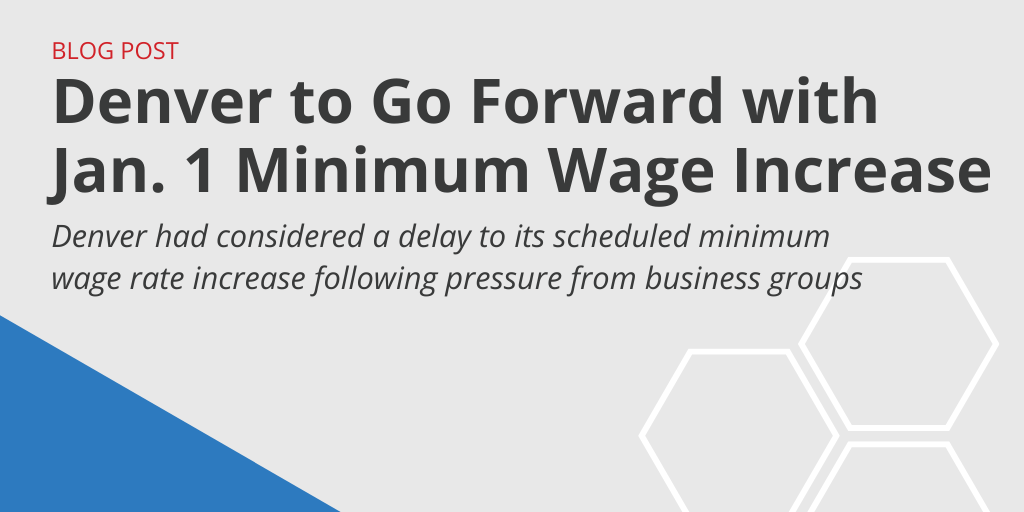 Despite pressure from business groups to delay its implementation, Denver will move ahead with its Jan. 1, 2021, minimum wage increase.

The city had considered a delay to its scheduled minimum wage increase, as Denver’s economy continues to feel the effects of the COVID-19 pandemic.

Still, in late November 2020, city leaders opted not to delay the increase, which will go into effect at the start of the new year.

After 2022, minimum wage in Denver will be based on the Consumer Price Index (CPI).

With such aggressive rate increases, and the ongoing impact of the pandemic, there was a push in Denver to delay the 2021 bump.

The Colorado Restaurant Association was among those asking Denver leaders to consider a delay.

“Restaurants are grappling with a 100-year pandemic — the most challenging crisis they’ve faced in living memory,” CEO Sonia Riggs said in a statement. “Twenty-four percent of restaurants are under threat of imminent closure thanks to the indoor dining shutdown, and 60 percent may not make it three months. Consider all the staff restaurants are already being forced to cut. A minimum wage hike will just exacerbate the problem.”

Still, Denver will move ahead with its new minimum wage rate. And city leaders say they will take steps to support businesses.

“This was not an easy decision, but as our economy recovers – and we know it will – we don’t want to leave behind our minimum wage workers, who are often frontline workers in the pandemic and disproportionately women and people of color,” reads a joint statement from Denver Mayor Michael Hancock and Councilwoman Robin Kniech. “Putting additional dollars into the hands of workers also provides an economic stimulus by increasing their ability to spend.”

Meanwhile, Denver plans to continue efforts to support businesses through:

Had Denver delayed its minimum wage increase, it wouldn’t have been the first time. Virginia earlier this year pushed back a rate increase due to economic concerns over the coronavirus.

With Denver forging ahead with its Jan. 1 minimum wage increase, the city joins dozens of other jurisdictions across the country that will update rates at the start of 2021.

Nearly 20 states will increase minimum wage Jan. 1, 2021, along with several cities and counties.

Although the pandemic has placed an emphasis on new and updated paid leave laws, minimum wage will likely continue to be a hot employment law topic moving forward. President-elect Joe Biden has signaled his support for a nationwide $15 minimum wage rate, which could spark further action among lawmakers.

As 2021 draws near, employers should be sure to review their locations and determine whether they will be paying the appropriate rate. The U.S. Department of Labor continues to issue news about wage theft. Negative headlines are certainly something to avoid as consumers are increasingly more aware of where they spend their money.