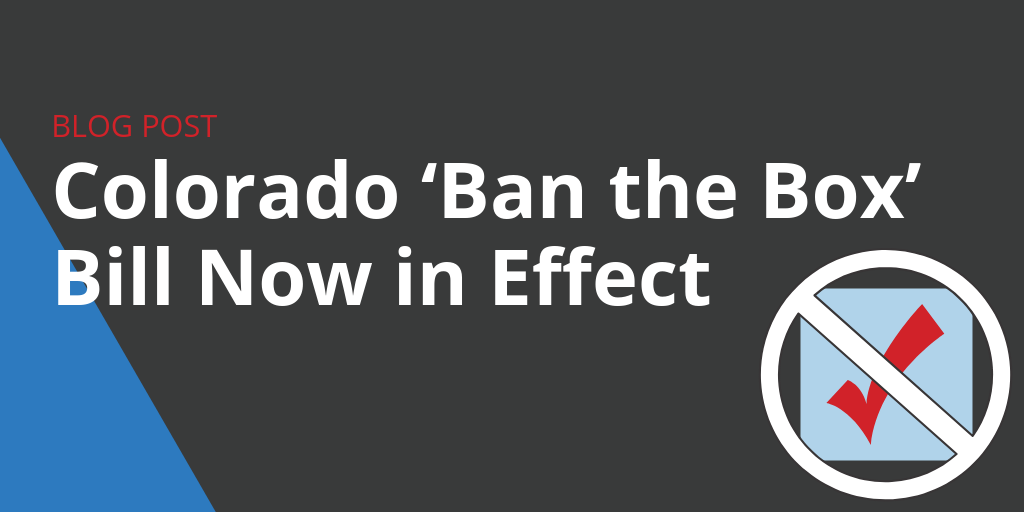 As of Sept. 1, the law applies to companies with 11 or more workers. Come September 2021, it will apply to all businesses in Colorado.

Colorado employers can no longer ask prospective employees about their criminal history. The state’s “ban the box” legislation, passed in May, is now in effect.

The new law went into effect Sept. 1, making Colorado the 13th state to enact a ban the box bill. Such laws reference a checkbox on employment applications that ask applicants to reveal whether they have been convicted of a felony.

Other states that have passed ban the box legislation include:

Dubbed the “Colorado Chance to Compete Act,” the bill also bans employers from stating in job postings that people with a criminal history can’t apply. As of Sept. 1, the law applies to companies with 11 or more workers. Come September 2021, it will apply to all businesses in Colorado.

However, the law does not prohibit companies from performing background checks on applicants. Also, it does not apply to jobs where the law already prohibits someone with a criminal history from holding them.

The Colorado Department of Labor is charged with enforcing the measure.

Colorado in 2012 instituted ban the box for state employees. The idea behind the measure is to bolster job opportunities for people with criminal backgrounds.

“A criminal conviction should not mean that someone is unemployed for the rest of their life,” Gov. Jared Polis said at a signing ceremony.

As ban the box legislation grows, some states are moving toward enforcement.

In May, the Massachusetts attorney general announced that her office issued 17 warning letters to Boston-area businesses for violating the state’s ban the box bill. Three companies, all national employers, were required to take steps to become compliant and pay a $5,000 fine.

“Jobs are the pathway to economic security and building a better life,” Attorney General Maura Healey said in a statement. “But unfortunately, many of our residents with criminal records face barriers to securing employment. These actions are an effort to give all job applicants a fair chance.”

Meanwhile, several cities have created their own ban the box ordinances, including Los Angeles, Philadelphia and Washington, D.C.

Find more information about ban the box bills on our blog, Ban the Box: What Employers Need to Know.