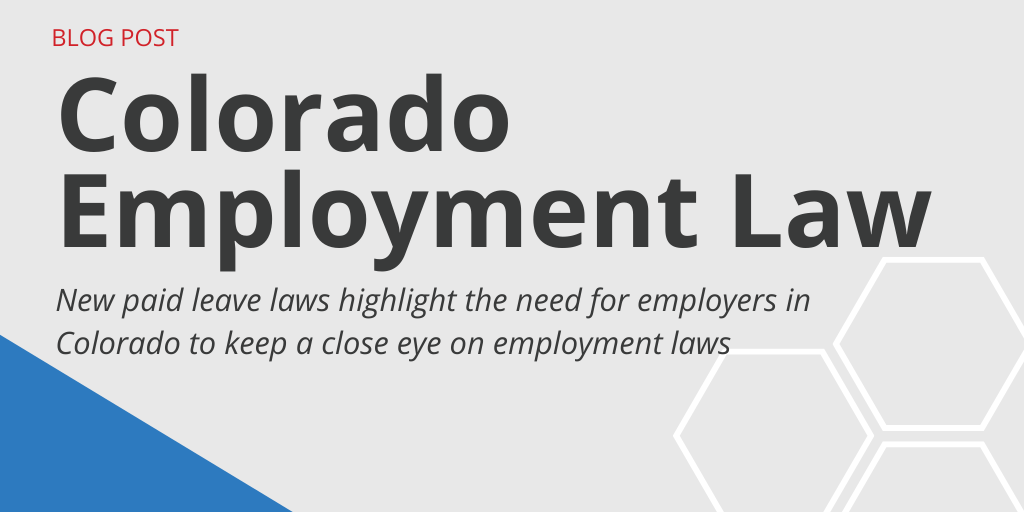 With new paid leave laws also being passed in 2020, it makes sense to review the issues that impact employers in Colorado.

In recent years, Colorado employment law has joined the ranks of the nation’s most complex.

With new paid leave laws also being passed in 2020, it makes sense to review the issues that impact employers in Colorado.

In 2017, Colorado passed an amendment to increase the state’s minimum wage.

Since Colorado’s minimum wage reached $12 an hour, increases have been based on the Consumer Price Index (CPI), as was the case at the beginning of 2021. The state saw a modest bump based on the CPI:

It’s also worth noting that Colorado in 2019 gave cities the power to set their own minimum wage rates.

During the summer of 2020, Colorado passed a paid sick leave law, which went into effect at the beginning of 2021.

It applies to all employers in Colorado. Employees, both hourly and salaried, accrue one hour of paid sick leave for every 30 hours worked, capped at 48 hours.

Qualifying reasons for use are broad, including time to care for a child due to a school or workplace closure, and to deal with issues related to domestic and sexual assault of an employee or family member.

Meanwhile, voters during the 2020 election passed a ballot measure that will bring paid family and medical leave to Colorado.

It applies to nearly every employer in the state.

Employers must provide 12 weeks of paid time off for the birth of a child and family emergencies, with an additional four weeks for pregnancy or childbirth complications.

To pay for the program, Colorado will begin collecting fees from both employers and employees starting in 2023. Employees can begin using benefits in 2024.

With the law’s passage, Colorado became the ninth state in the U.S. with a paid family and medical leave law, in addition to Washington, D.C.

Colorado is also among a growing number of states with a ban the box law, which went into effect there in 2019.

Employers cannot ask prospective workers about their criminal history. However, it does not apply to jobs where the law already prohibits someone with a criminal history from holding them.

Still, employers can conduct background checks on job applicants. The law simply eliminates the box where someone applying for a job would indicate whether they have been convicted of a felony.

Currently, it applies to companies with 11 or more employees. But starting in September 2021, it will apply to all employers in Colorado.

While recreational marijuana has been legal for nearly a decade in Colorado, the law gives employers plenty of leeway when it comes to drug testing.

Employers may test randomly or at intervals, as well as being able to screen prospective employees. Decisions on hiring based on the presence of marijuana in a pre-employment drug screening is legal under Colorado law. Employers can create possession and use rules that are stricter than state law, but not less.

Also, in 2015 the Colorado Supreme Court ruled in favor of a company that fired a worker for marijuana use during non-working hours because it is illegal under federal law.

As always, employers should establish clear policies about marijuana and testing procedures.

These are but a few of the employment law matters to consider in Colorado, which is quickly becoming one of the more employee-friendly states in the U.S.

With new paid leave laws, the stickiness that comes with legalized weed and, of course, the ongoing issues associated with the COVID-19 pandemic, employers with locations in Colorado should keep a close eye on employment law matters.