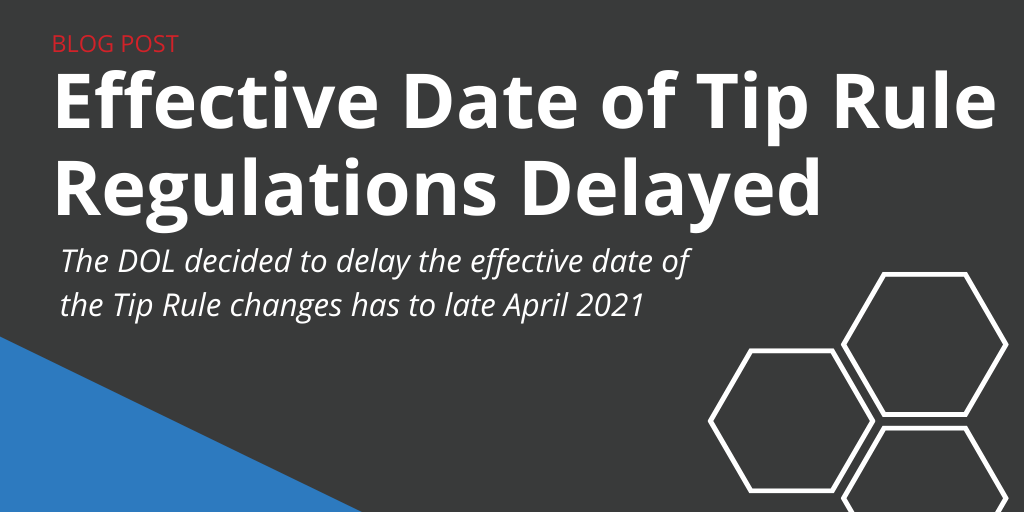 The delay is meant to give the U.S. Department of Labor (DOL) time to review the law and policy issues before it takes effect. A public comment period on the final rule ended in mid-February.

The effective date of updated tip regulations under the Fair Labor Standards Act (the Tip Rule) has been delayed from early March until April 30.

Published in the Federal Register in December 2020, the amendment to the Fair Labor Standards Act (FLSA) allows employees who receive tips — restaurant servers, primarily — to pool their tips with non-tipped workers so long as the employer does not take a tip credit. The measure also bars employers and managers from keeping employee tips.

The delay is meant to give the U.S. Department of Labor (DOL) time to review the law and policy issues before it takes effect. A public comment period on the final rule ended in mid-February.

When the final rule was initially announced late last year, Wage and Hour Administrator Cheryl Stanton said it was aimed at giving employers flexibility and clarity to increase pay for back-of-house workers, such as cooks and dishwashers, who were previously excluded from participating in tip pools.

“Newly allowed tip sharing may incentivize the inclusion of these previously excluded workers and reduce wage disparities among all workers who contribute to customers’ experience,” she said in a statement.

If it moves forward as planned, the final rule would:

The final rule also seeks to eliminate the 80-20 Rule, which limits the time tipped employees can spend doing non-tipped duties — 20 percent of their work — while still taking a tip credit. However, several state attorneys general have filed a lawsuit regarding the 80-20 rule.

Meanwhile, the role further defines which employees are considered managers or supervisors, who would not be eligible to receive tips. This includes those recognized as managing the workplace, who are in charge of two or more full-time workers, and have influence regarding the hiring and firing of employees.

Restaurant industry employers should look for an announcement from the DOL regarding any changes.

The Biden administration has been active in rolling back Trump-era policies, and the Tip Rule could be included.