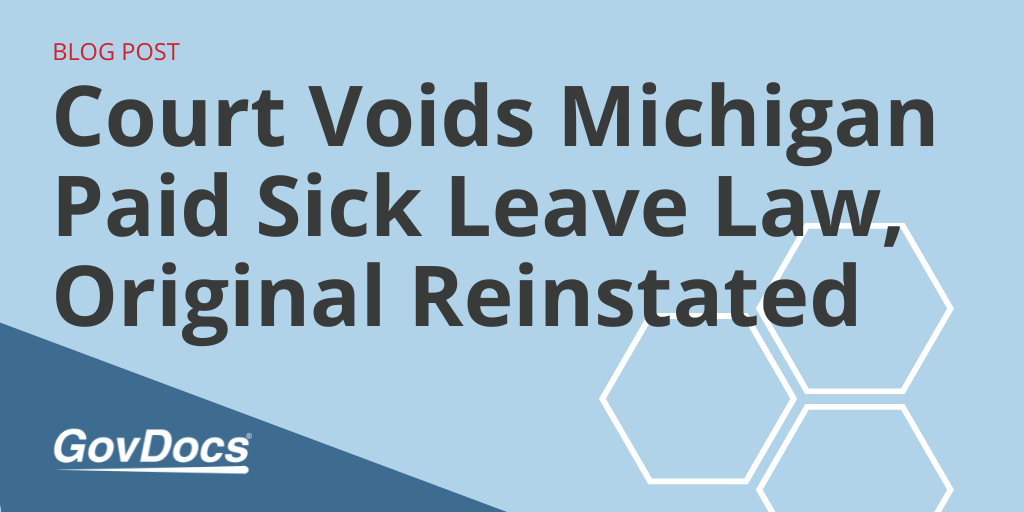 The current form of Michigan’s paid sick leave law was recently voided by a state court of claims, meaning the provisions of the original paid sick leave ballot measure are now technically law.

Originally introduced through a ballot initiative in 2018, the Michigan Paid Medical Leave Act (PMLA) has been in effect since March 2019.

The issue is that the Michigan legislature voted to approve the ballot initiative and then immediately amended it prior to it becoming law, making several revisions to the initial requirements. This action took away Michigan voters’ ability to decide on the original ballot initiative or the amended version passed by the legislature.

State officials have released a statement about the court of claims ruling.

This decision as it stands would increase the current minimum wage in Michigan as well as expand the eligibility, accrual, and use of paid sick leave, among other benefits for Michigan’s working people. This will mean changes for businesses, and they will need to determine how to comply.

On July 29, 2022, the Court of Claims entered an order staying the effect of this decision until February 19, 2023, to give employers and the relevant state agencies time to accommodate the changes required by the ruling.

We understand residents want clarity on these issues, but this litigation is fluid, and we will update this webpage accordingly as the situation continues to develop.

In response to the action by the Michigan legislature, the original petitioners of the ballot measure filed suit alleging lawmakers did not have the authority to adopt and amend the ballot initiative the way they did.

On July 19, 2022, the Michigan Court of Claims, in Mothering Justice v. Nessel, held the Michigan legislature violated the Michigan constitution when it adopted and then immediately amended the PMLA.

As a result of this court decision, the current version of Michigan paid sick leave is void and the provisions of the original paid sick leave ballot measure are now technically law.

As amended, the PMLA required employers with 50 or more workers to provide 40 hours of paid sick leave at an accrual rate of one hour of sick leave for every 35 hours worked.

There was also a provision in the original ballot measure that allowed employees the right to sue for retaliation. This provision was removed in the amended PMLA.

A motion to stay the decision in Mothering Justice v. Nessel has been filed and the hearing is scheduled for Aug. 2, 2022.

And minimum wage in the state could also be impacted. Look for information soon on Employment Law News.

Unless the stay is granted in this case, the initial ballot initiative provisions are valid and pursuant to a statement from the Michigan Wage and Hour Division, the earliest possible effective date would be Aug. 9, 2022.

Employers should review their current leave policies for Michigan employees and have a plan in place to make any necessary modifications in the event the expanded sick leave provisions of the original ballot initiative become law.