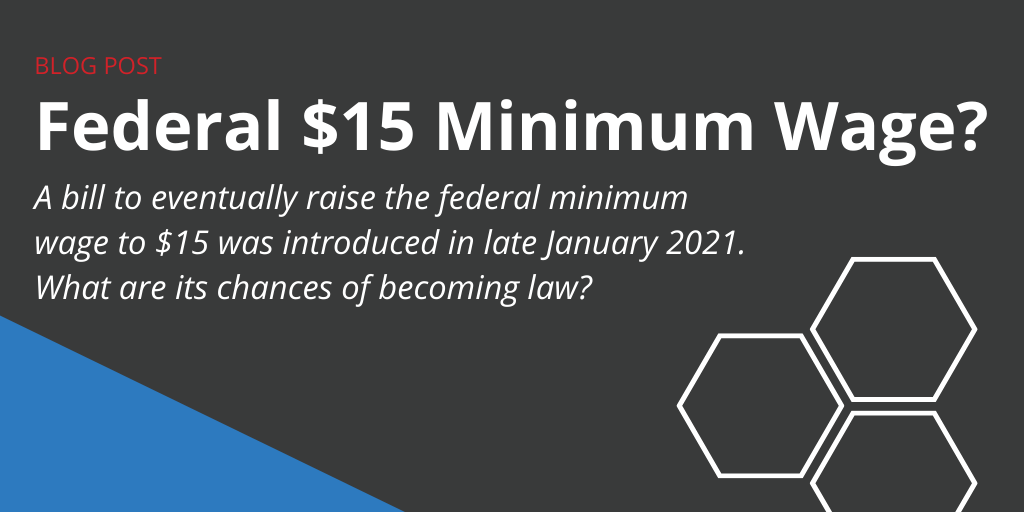 A bill to eventually raise the federal minimum wage to $15 was introduced in late January 2021. What are its chances of becoming law?

Could a federal $15 minimum wage be coming?

Democrats in the U.S. House of Representatives this week proposed legislation that would gradually bring the federal minimum wage rate to $15 an hour.

The federal minimum wage, $7.25, has not increased since 2009. It’s the longest such stretch in the history of the nation.

After the years of scheduled increases, further rates would be indexed via median wage growth. The calculation will take place 90 days before the annual adjustment becomes effective and is rounded to the nearest $0.05. It cannot fall below.

Meanwhile, the initial increase for tipped employees would take the rate from $2.13 to $4.95. Future increases are less clear, however.

Federal Minimum Wage and the Fight for $15

President Joe Biden has previously voiced his support for a $15 federal minimum wage.

Since he has taken office, Biden also included a $15 minimum wage proposal as part of his $1.9 trillion COVID-19 relief bill. He has also asked the U.S. Department of Labor to investigate the efficacy of having a $15 minimum wage for federal workers.

UPDATE (Feb. 5, 2021): The Senate passed the relief bill without the minimum wage increase.

The action at the federal level builds on growing momentum in recent years to increase the minimum wage rate, much of it spurred by the Fight for $15. In 2012, fast-food employees in New York City refused to work in an effort to increase their pay.

In 2019, the U.S. House passed a bill to eventually bring the minimum wage to $15, but it did not gain any traction in the Republican-controlled Senate. However, with Democrats now in control of both chambers (via the vice president in the Senate) and the presidency, a $15 minimum wage may have legs.

“In the richest country in the history of the world, if you work 40 hours a week, you should not be living in poverty,” Sen. Bernie Sanders told reporters. “Minimum wage must be a living wage, enabling people to live with dignity.”

Could a Federal $15 Minimum Wage Pass?

Still, with GOP lawmakers generally opposed to the idea of a $15 minimum wage, it would be an uphill climb for it to become law. Overcoming a Senate filibuster would take 60 votes, though a minimum wage hike could be included in a taxing and spending measure that would only require a simple majority.

Pushback has also come from business groups over the past decade. And with the pandemic continuing to negatively impact businesses with minimum wage employees, an increase could be a hard sell for proponents.

Also, an often-cited 2019 report from the Congressional Budget Office showed the potential as many as 1.3 million in lost jobs with a $15 minimum wage in 2025.

Of course, with inaction at the federal level, smaller jurisdictions have been setting their own minimum wage rates over the past several years.

Dozens are poised to eventually reach $15 an hour, and in many California cities, several have already surpassed that figure. Meanwhile, major employers have taken steps to pay employees rates above what is required by law.

What does all this add up to? The surge of minimum wage increases could spur federal lawmakers to act on a new rate. But where it lands on the priority list, the appetite of conservatives for an increase and other factors will ultimately determine its fate.