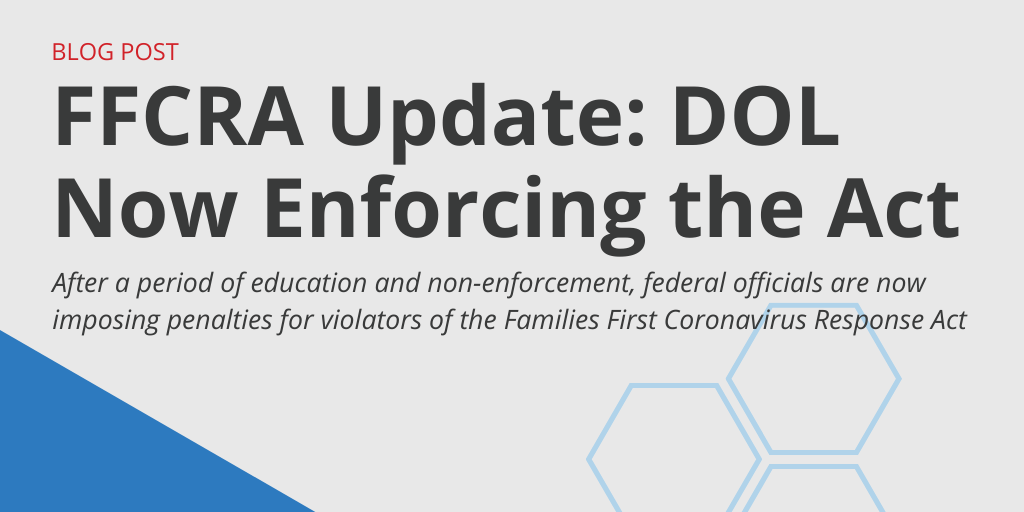 Already, federal officials have received “hundreds of complaints.” The legislation went into effect at the beginning of April and expires at the end of 2020.

The U.S. Department of Labor (DOL) recently announced it would end a temporary non-enforcement of the new federal paid leave law. Following a period of education and guidance, the DOL has begun enforcing employer paid leave obligations under the Families First Coronavirus Response Act (FFCRA).

“With millions of Americans eligible for new and expanded leave programs, the U.S. Department of Labor is working tirelessly to answer the public’s questions and conduct outreach to groups and individuals so that employers nationwide provide employees with the benefits they need,” Wage and Hour Division Administrator Cheryl Stanton said in the announcement.

Already, federal officials have received “hundreds of complaints,” Stanton said. The legislation went into effect at the beginning of April and expires at the end of 2020.

The legislation applies to businesses with fewer than 500 employees and includes both paid sick leave and family and medical leave because of issues related to the coronavirus.

While paid family and medical leave is unpaid for the first 10 days, the paid sick leave would cover that timeframe.

eligible for a pro-rata portion of this.

Under the paid family and medical leave portion of the bill, workers who have been employed for at least 30 days are eligible for up to 12 weeks of paid leave.

Check out our previous blog on the FFCRA for specifics on the law, including eligible reasons for usage.

Though the DOL plans to continue its efforts to educate employers, enforcement of the FFCRA provisions is underway.

Previously, the DOL had said it would not act on violations so long as the employer made a reasonable, good faith effort to comply with the FFCRA. Now, employees who believe their employer is in violation of the legislation are encouraged to contact federal officials about any potential issues.

Employers found in violation of the FFCRA will be subject to the penalties and enforcement described in Sections 16 and 17 of the Fair Labor Standards Act, according to the DOL. That can include:

The announcement to begin enforcing the provisions of the FFCRA means employers should review their policies and procedures to remain compliant.

Also note that many jurisdictions have updated their paid leave laws to include reasons related to COVID-19.