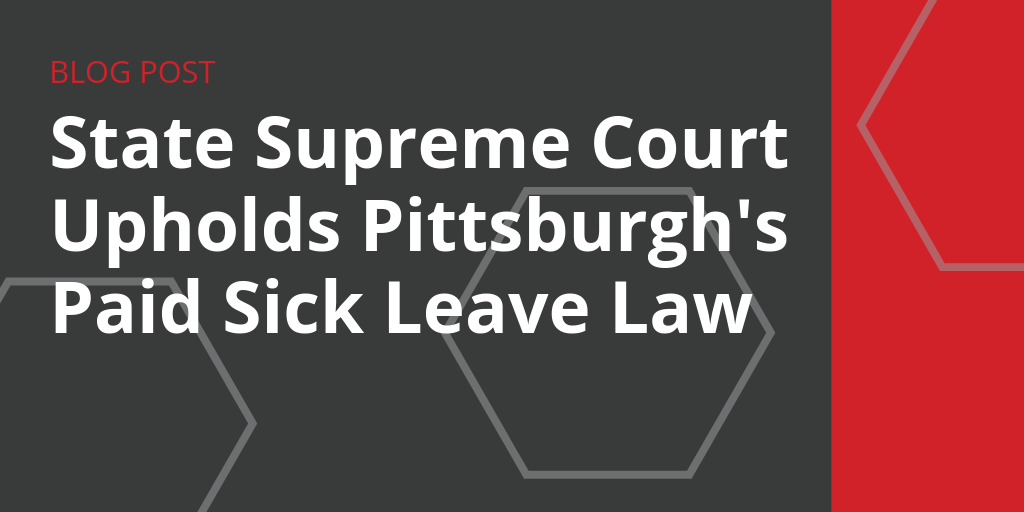 In terms of usage, employees in Pittsburgh may take the time for their own illness or injury, or to care for a family member. There are also provisions in the legislation that prohibit an employer for retaliating against an employee for using the time off.

After years in the Pennsylvania legal system, Pittsburgh finally has its paid sick leave ordinance.

Initially approved in 2015, the ordinance faced challenges from businesses groups, which were twice successful in stalling the measure in lower courts.

However, the Pennsylvania Supreme Court in mid-July ruled 4-3 in favor of Pittsburgh’s Paid Sick Days Act.

Under the measure, employees earn one hour of sick leave for every 35 hours worked. The paid sick leave ordinance requires Pittsburgh employers to provide:

While the Pittsburgh Paid Sick Days Act to was initially to go into effect in January 2016, it’s unclear when the law will be effective. The city is expected to issue further clarification through regulations or guidance on the law soon. That explanation is expected to include the effective date.

Also of note: the state legislature has considered a bill that would block cities from enacting their own paid sick leave rules.

In terms of usage, employees in Pittsburgh may take the time for their own illness or injury, or to care for a family member. There are also provisions in the legislation that prohibit an employer for retaliating against an employee for using the time off.

“Guaranteeing paid sick leave is a huge win for those who live and work in Pittsburgh. As I’ve long said, people should not be forced into the making the tough decision between staying home sick and missing a day’s pay, or coming in to work and spreading infection,” Mayor William Peduto said in a statement. “I want to thank the Supreme Court for affirming Pittsburgh’s statutory powers to do what’s best for our people, and the four Pittsburgh City Council members who sponsored the 2015 Paid Sick Days Act: Corey O’Connor, Natalia Rudiak, Deb Gross and the Rev. Ricky Burgess.”

Legal challenges to paid sick leave laws have cropped up elsewhere, most notably in Texas.

With paid sick leave laws being passed and/or challenged in the courts, employers must remain aware of the latest regulations and their impact on compliance.

Many rules apply in different jurisdictions: notices, rates of accrual and pay, and more. Tracking paid leave laws will continue to be a major component of the efforts of compliance, payroll and HR teams.

More Stories From Labor Law News
Colorado Court: ‘Use It Or Lose It’ Policy Lawful for Vacation Time

Answered in Detail: Your Employment Law Questions
Scroll to top