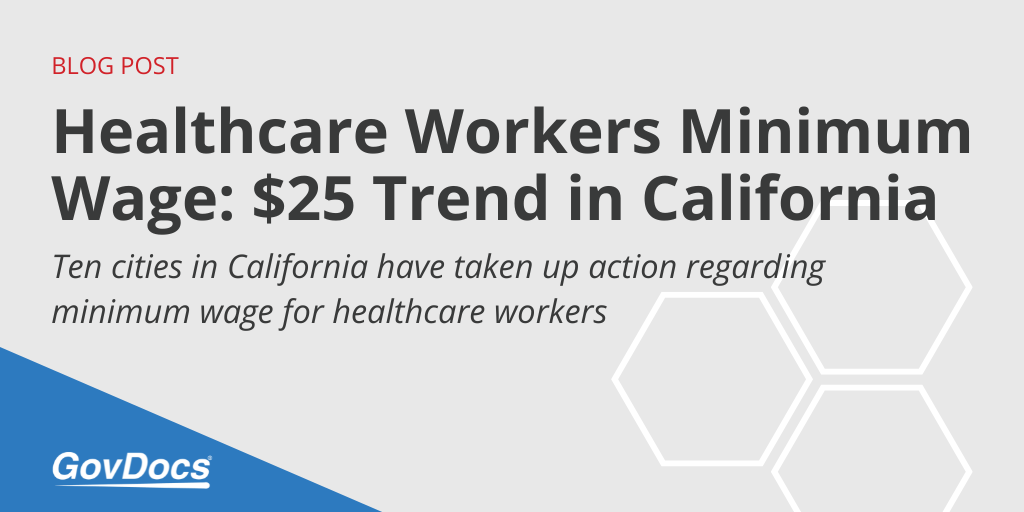 There is a lot to watch in this area as the moving pieces relating to healthcare workers minimum wage in these California cities fall into place.

Healthcare workers minimum wage? Once again, California is at the forefront of a new employment law trend.

The cities that have passed or introduced a $25 minimum wage for healthcare workers (as of this writing) include:

The California cities of Los Angeles and Downey were the first that approved new healthcare worker minimum wage ordinances in July 2022. The increases covered healthcare worker wages at privately owned facilities, moving to $25 per hour.

Challenges to the City Ordinances in Los Angeles and Downey

On Aug. 10, 2022, petitions were filed with the cities of Los Angeles and Downey seeking to stay the ordinances and have the minimum wage increases decided by public vote in each city. The referendum petitions are currently being reviewed.

If the referendum petitions are verified, the respective city councils will need to determine whether to submit the healthcare workers minimum wage ordinance to the city’s voters or to repeal the ordinance.  If the referendum petition is not verified, then the respective city clerks will issue a certificate of insufficiency and the ordinance will take effect as of the date of the certificate.

Neither city has issued a decision yet on their review of the referendum petition. So, for now, employers are not required to pay the increased healthcare worker minimum wage.

Neither city’s ordinance has been challenged yet.

Meanwhile, the cities of Duarte and Inglewood declined to adopt their healthcare workers minimum wage ordinance outright and instead have decided to let their voters decide the issue in November. If approved in the November election, the ordinances in both cities would take effect for covered employees working in privately owned healthcare facilities starting Jan. 1, 2024.

Finally, the cities of Anaheim, Baldwin Park, Culver City and Lynwood did not have enough signatures for the healthcare minimum wage ordinance to move forward.

What Next for Employers?

There is a lot to watch in this area as the moving pieces relating to healthcare workers minimum wage in these California cities fall into place.

Privately owned healthcare employers in California should take note and consider reviewing their pay scales for employees affected by these ordinances and have a strategy in place to address pay issues in the event the ordinances become effective.