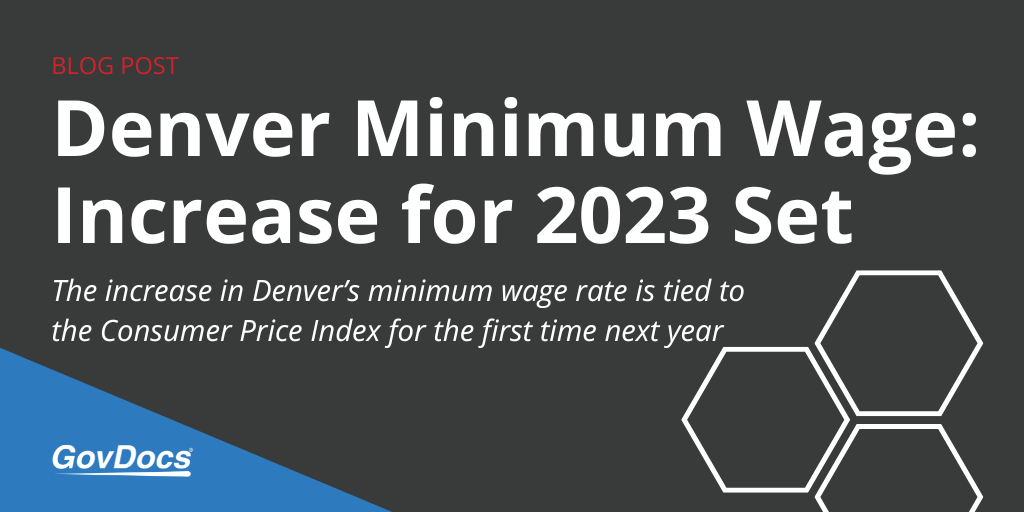 The standard Denver minimum wage rate will reach $17.29, effective Jan. 1, 2023, but the city does have a separate rate for tipped employees.

City officials in August 2022 announced the 2023 increase, which will for the first time goes up based on the applicable Consumer Price Index (CPI).

Indexing of rates has become more common in recent years, and with the current rate of inflation, minimum wage numbers are projected for larger bumps than might be seen otherwise.

Soon after Colorado gave cities the power to enact their own minimum wage rates, Denver in 2019 passed its ordinance, with scheduled annual increases on Jan. 1 each year from 2020 through 2022.

Moving forward, however, Denver’s rate is tied to the CPI for the Denver-Aurora-Lakewood area — which was 8.94 percent for the timeframe the city uses — resulting in the increase from $15.87 currently to $17.29 for 2023.

“At a time when inflation and rising costs are impacting working families everywhere, this increase in our minimum wage, which is based on the Consumer Price Index, will help those who need it most,” Mayor Michael B. Hancock said in a statement. “We know this will put additional burdens on our local businesses, but this is an important tool to support vulnerable workers across the city.”

Headlines regarding the “Fight for $15” have slowed in recent months. These days, many jurisdictions are well above that minimum wage threshold. More than 50 counties and cities increased rates on July 1, 2022, with several near, at or above $15 an hour.

Related: How Many States Have a $15 Minimum Wage?

As a reminder, Colorado’s minimum wage rate is currently $12.56 and will again be indexed in 2023. It’s estimated to increase to $13.68, though an official announcement from state officials hasn’t made as of this writing.

Meanwhile, under Colorado law, Denver’s minimum wage permits employers to take a tip credit only in the food and beverage industries.

Such employers are allowed to take a $3.02 per hour tip credit as long as they can document those workers received at least that amount in tips. A typical tipped employee in the food and beverage sector will receive a $14.27 minimum wage in 2023.

Despite using the Denver-Aurora-Lakewood area CPI to calculate the new rate for the city of Denver, employers outside the city limits are not subject to the minimum wage ordinance and must abide by the state rate.

In announcing the 2023 rate for Denver, city officials reminded employers to double check their locations to determine minimum wage rates.

“Employers should not rely on their mailing address to determine whether or not to pay Denver’s local minimum wage,” Auditor Timothy O’Brien said. “We recommend using our regional address finder on our website to check if work was performed within the boundaries of the city and county of Denver.”

Applying the appropriate employment laws to locations is a major factor in compliance, especially for companies that operate across the nation. Employers should ensure they know the jurisdiction whose laws apply to their locations.

For years now, minimum wage management has been a major challenge for large employers.

The federal minimum wage rate hasn’t increased since 2009. Without action from Congress, many states, counties and cities continue to enact their own rates.

Elsewhere, about a dozen cities in California have considered special minimum wage rates for healthcare workers. But two of the rates that were set to go into effect in August 2022 — Los Angeles and Downey, Calif. — are currently on hold, with potential referendums on deck there… and in other California cities.

At the same time, two other cities that passed healthcare worker minimum wage rate ordinances — Monterey Park and Long Beach — have not faced challenges to their laws.

These situations underscore the complexities of compliance with the multitude of minimum wage rates across the U.S.

Especially considering the nearly $1.50 bump, employers with locations in Denver should get ready for the minimum wage increase coming in 2023.