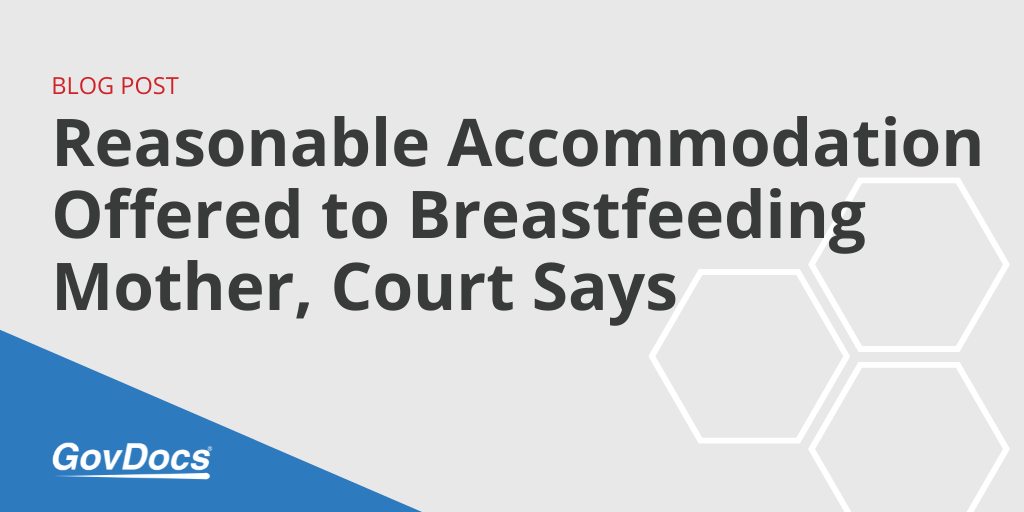 The company nurse informed Ames of the company’s lactation policy, which gave badge access to the lactation rooms once an employee completed paperwork that had a three-day processing period.

A female employee in need of a place to lactate met with resistance and strict company policy.

Angela Ames, a former employee of Nationwide Mutual Insurance, was hired as a loss-mitigation specialist in October 2008. Ames gave birth to her second child in May 2010.

Before returning to work, Ames spoke with a company case manager and asked where she could express breast milk. She was informed she could use a designated lactation room, one of which was accessible on every floor.

When she returned to work and needed to use a lactation room, she was met with resistance. The company nurse informed Ames of the company’s lactation policy, which gave badge access to the lactation rooms once an employee completed paperwork that had a three-day processing period. This policy was available to all employees on the company intranet, yet no one mentioned this policy to Ames.

When Ames mentioned that she needed a room immediately, the nurse asked the security desk to give Ames access “as soon as possible,” then suggested she use a wellness room typically used by sick employees, but stated there wasn’t a functioning lock on the door and that she may expose her milk to illness. The room was occupied, so Ames was instructed to come back later.

While waiting for the wellness room, she met with her supervisor and was informed that none of her work had been done while she was on leave, and that she would be given only two weeks to catch up on eight weeks’ worth of work–requiring many hours of overtime–or be disciplined.

Ames approached her department head for assistance. Noticing that Ames was upset, the supervisor handed Ames a piece of paper and a pen stating, “I think its best that you just go home and be with your babies,” then dictated her resignation letter.

Ames filed suit against the company on the basis of sex- and pregnancy-discrimination, claiming her employer was in violation of Title VII of the Civil Rights Act of 1964.

A lower court dismissed Ames’ case, deciding she could have sought other internal complaint procedures about her discriminatory treatment before writing her resignation letter. The court also found that the comment “go home and be with your babies” was gender neutral because both males and females can be parents.

On appeal, the Supreme Court upheld the lower court’s judgment saying that she did not meet the burden of proof needed to proceed with a claim of sex- or pregnancy-discrimination. The court found that the company made several attempts to accommodate Ames by suggesting temporary solutions. Even though these solutions may not have been immediately available or ideal, Ames resigned before her company could thoroughly address her requests for accommodation. Additionally, the court cited that Ames should not have assumed the worst by thinking the interim solutions would not work and her only option was to resign.

Employers should be sure to audit federal and local laws to align company policies regarding maternity leave and lactation accommodations.

Title VII of the Civil Rights Act of 1964

Title VII is a federal law that prohibits employers from discriminating against employees on the basis of sex, race, color, national origin, and religion. It generally applies to employers with 15 or more employees, including federal, state, and local governments.

The Pregnancy Discrimination Act (PDA) is an amendment to Title VII of the Civil Rights Act of 1964. This amendment states that women “affected by pregnancy or related conditions must be treated in the same manner as other applicants or employees who are similar in their ability or inability to work.”

This amendment to Section 7 of the FLSA, requires employers to provide reasonable break time for an employee to express breast milk for her nursing child for one year after the child’s birth each time such employee has need to express the milk. Employers are also required to provide a place, other than a bathroom, that is shielded from view and free from intrusion from coworkers and the public, which may be used by an employee to express breast milk.

What is Reasonable Accommodation?

Reasonable accommodation as defined by the U.S. Department of Justice is “any modification or adjustment to a job or the work environment that will enable a qualified applicant or employee with a disability to participate in the application process or to perform essential job functions.”